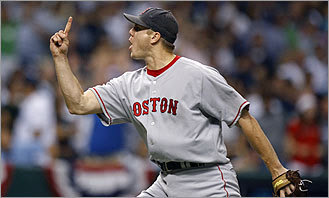 Last Thursday night around 11 PM, I had no reason to believe the Red Sox would still be playing baseball today. It looked for all the world like the curtain was coming down on the 2008 season, and it looked like the finish would be butt-ugly. But the Red Sox have risen from the ashes, and now will play the Tampa Bay Rays on Sunday night for the American League championship.

I can still hardly believe it's happening. But it is, as the Red Sox won a gutty 4-2 game last night, as Josh Beckett improved his record in elimination games to 3-0, going five innings while allowing just two solo homers.

The bullpen was simply outstanding, going four shutout innings. Hideki Okajima went two, allowing just one base runner. Justin Masterson allowed just a hit batsman, then retired the side. And Jonathan Papelbon shut the door on Tampa Bay, throwing just eight pitches in getting the side 1-2-3.

And now the Rays are feeling the pressure, and it is all on them. A monumental lead in Game 5 slipped away, and they allowed the Red Sox to come off the deck. "Big Game James" Shields gave up four runs in 5 2/3 innings, including two solo shots to Kevin Youkilis and Jason Varitek. (And where the hell did this guy get a nickname like that? What "big game" has this guy EVER pitched in? For a guy who has been unbeatable at home, he sure isn't, as the Sox have beaten twice in Tampa in this series.)

Beckett allowed a homer to B.J. Upton in the first, but the Sox answered right back with Youk's homer. When Jason Bartlett hit one in the fifth to tie it at 2, the Red Sox again answered it right back with Tek's blast in the sixth (which was his first hit in the ALCS). That really showed me the determination of this club. David Ortiz also had two clutch hits, the second driving in the fourth run after Bartlett's throwing error extended the sixth. (The Rays are absolutely feeling the pressure, as it was their fifth error in three games. How many did they make in their first seven? None.)

By the way, did anyone else notice that back in Game 6 of the 2004 ALCS during the Red Sox historic 3-0 comeback, the Sox won Game 6 by the score of 4-2, the same as last night's game? And it was also away from home, won by an injured pitcher?

Terry Francona now has a record of 9-1 in postseason elimination games, which is the best in baseball history. And the Red Sox have now won nine straight ALCS elimination games, going back to 2004. And, of course, that a record. Simply incredible.

Tonight it's Jon Lester against Matt Garza. All the heat and pressure is on Tampa Bay not to become another team to have blown such an enormous postseason lead. The Sox are basically playing with the house's money. And they can make history once again tonight and come from 3-1 back to win, as they have done so three previous times in their storied history.
Posted by The Omnipotent Q at 11:42 AM

Smelling salts anyone? Yeah I know "been there, done that HAD EM ALL THE WAY!" but damn it is stressful all the same.Hide The garlic kids cause the Sox are Dracula-just cannot kill the bastard.

I can have fun with my anxieties so The Sox do play with my emotions.

Game 7 is the best. Take all the time since February. All the wind sprints, stretches, hits, runs, slides and call it all in. There is that phrase "Eye of The Tiger" you knock em out when they are down. The Rays have not done that. The Sox have battled and thrived.

Tomorrow Night-empty the gun, go all in.

All hands on deck tonight. The Sox smell blood. And the Rays are running scared, and the Sox know it.