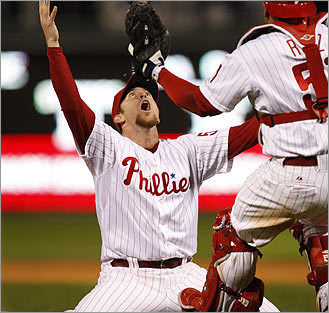 My congratulations to the Philadelphia Phillies and their fans on winning their second World Series championship in their 126-year history with a 4-3 win over the Tampa Bay Rays in the conclusion of the suspended game on Wednesday night.

It's the first championship for the city of Philadelphia in any of the four major team sports since the 76ers won the NBA title in 1983, and the first Phillies championship since their first-ever one in 1980.

And as rare a championship as it is for Philadelphia, it was even rarer that the Eastern United States got to see a World Series finish at a decent hour, as the Phillies won it at just before 10 PM ET. But of course, it was a fluke because of the weather, so don't expect to see that happen again any time soon. (That's what happens when you sell out to the TV networks.)

I was pulling for the Phillies, as a number of friends are mine are big Phillies fans, and I'm really glad they are able to experience the thrill of watching their team win it all. I was at Professor Thom's to see their victory, with a number of other Phillies fans. My buddy Mike is one of Thom's owners, and I was really happy for him. My friends and I drank a champagne toast with Mike right after the win, with "Philadelphia Freedom" on in the background.

I also met a number of Phillies fans in the bar. I wore an old Phillies shirt my dad got for me years ago when he worked for the Phillies at their spring training complex in Clearwater, Florida. I had to admit to them I was really a Red Sox fan pulling for the Phillies and I told them about my dad and the shirt. A couple were a little disappointed to hear it, but they all welcomed my congratulations.

So for my friends Mike, Campbell, Dave L, and Dave Q, I offer my congratulations on the win. I'm really glad they get the chance to experience what I did in 2004 and 2007.

And wherever he is, Tug McGraw must be smiling.

But now a couple of depressing thoughts come to my mind.

The Red Sox are now no longer defending World Series champions. (For the second time in four years, I thoroughly enjoyed a year of hearing that. Let's do it again.)

And the baseball season is now over. Here comes the winter.

So, when do pitchers and catchers report? (Check my above countdown clock to find out.)
Posted by The Omnipotent Q at 1:51 AM

"We Forgive You Mitch."

Ironically he is now a popular sports talk show host in Philly!!

I always loved The Wild Thing

I saw that same sign...reminded me of that "We Forgive Bill Buckner" sign some Sox fans had after they won the 2004 World Series in St. Louis...