You Should Never Assume! 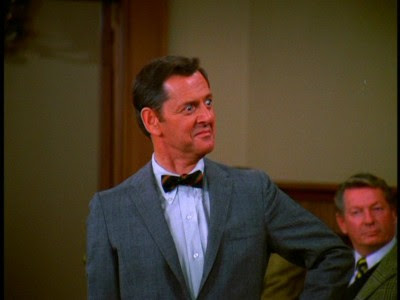 I have to admit that I wasn't terribly worried about Monday's game. I thought this one would be in the "W" column for the Sox and I was beginning to think about Tim Wakefield's Tuesday start. The pitching matchup clearly favored the Sox: Jon Lester, who was simply wonderful in the ALDS and was unbeatable at Fenway all year vs. Matt Garza, who got pounded at Fenway in June and by the White Sox in his one ALDS start in Chicago.

As the great Felix Unger (pictured) once said on "The Odd Couple": "You should never assume...because when you assume, you make an ass out of u and me!" (That still makes me laugh every time I see it.)

Lester was simply awful, as he allowed two long bomb homers to B.J. Upton and Evan Longoria that made it 5-0 after three innings. Lester had actually gotten off to a great start, throwing just four pitches to get three outs in the first. But at the same time, the Sox were up to their usual tricks, leaving three runners in scoring position in the first two innings, and it included Jason Varitek striking out looking in the second. (Tek was also lustily booed by the fans after he popped up in the fourth. He also committed a passed ball that cost the Sox the first run.)

Like Mike Timlin, I will always love what Tek has meant to this team over the last decade. He's a warrior, but like Sarge, he appears to be done. I simply can't see how the Sox bring him back next year. He hasn't gotten a hit in the first three games, and I read that he's pissed at Tito for pinch-hitting for him in the ninth in Game 2. Tek, why do you think there are three catchers on the postseason roster?

And last week, I saw that the San Diego Padres elected to make Josh Bard a free agent, as he refused an assignment to the minors. Could the Red Sox correct a past mistake this winter? We'll see after the season.

Varitek hasn't been the only one dragging down the lineup. Jacoby Ellsbury and David Ortiz are also hitless in the ALCS, and Ellsbury is a staggering 0 for his last 20. The three are a combined 0-for-34 in the ALCS. And the middle of the order had just one hit yesterday, and that was a meaningless J.D. Drew single in the eighth. Only Dustin Pedroia and Mark Kotsay (who each had two hits) looked like they had their heads in the game yesterday. The Sox looked way too lethargic at times, and they've got to shake their asses tonight and get the bats going, especially when they need the clutch hit.

Garza wasn't anything special for the Rays yesterday, but he pitched well enough over six innings to win. The Rays coasted into a 9-1 win, as Rocco Baldelli and Carlos Pena both went deep late against Paul Byrd (who was in one game too late). They are now up 2-1. The Rays are a terrific team, and anybody who thought this series wasn't going to be a fight to the finish was kidding themselves.

Tim Wakefield gets the ball tonight against Andy Sonnanstine. It's no time to panic, but this is a game the Sox really need to win. Fortunately, the bullpen was spared by Byrd going 3 2/3 innings in relief of Lester. They may very well be needed tonight.

An embarrassing ass-whipping by the Rays might just be the wakeup call the Red Sox needed, especially it happening at home before some angry fans. I hope the Red Sox just don't assume they'll come back in this series.