I Guess All Good Things Must End 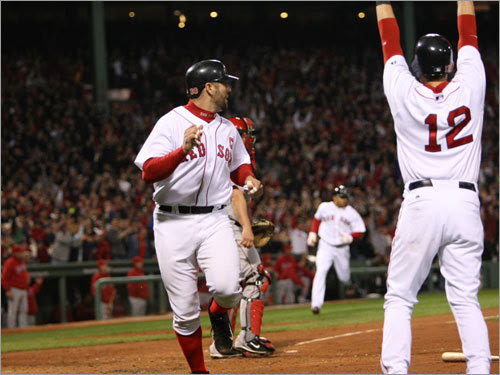 The Red Sox postseason winning streak over the LA Angels came to an end at 11 games on Sunday as the Angels pulled out a 12-inning, 5-4 win at Fenway Park.

It's a game the Red Sox really had no business at all in winning. Josh Beckett was not sharp at all, giving up 4 runs in five innings, while walking four ( that's more than he surrendered the entire 2007 postseason). It took Beckett 30 pitches to get through the first, and he allowed a bases loaded walk and escaped with just that. He and Jason Varitek just weren't on the same page, as Tek had to go out to the mound three times that inning.

The Red Sox got three gift runs in the second, runs they shouldn't have gotten. With the bases full, Jacoby Ellsbury hit a popup between Howie Kendrick and Torii Hunter that Kendrick let drop for a bases loaded single (the first one in postseason history). It scored Jed Lowrie, Jason Varitek and Coco Crisp (pictured).

But the lead didn't last, as Beckett allowed a two-run homer to Mike Napoli. It was a struggle for Beckett, and he only lasted five innings. He gave up another homer to Napoli in the fifth, and Beckett left the bases loaded twice before departing.

The Red Sox bullpen did a fine job after he left. Hideki Okajima, Manny Delcarmen, Justin Masterson and Jonathan Papelbon kept LA off the board for the next six innings. Their best threat was in the 11th, when Papelbon put two on with one out. But they couldn't push a run past him. The Sox also had two great opportunities go by with nothing. They had the bases loaded in the 10th against Francisco Rodriguez but Jed Lowrie lined to right to end it. They also a runner at second in the 11th with two outs, but Dustin Pedroia hit a wicked two hopper at Chone Figgins, who threw him out. Dusty is really struggling and is now 0-for-13 in this year's ALDS.

LA won it in the 12th on a Napoli single, a sac bunt and a bloop RBI single by Erick Aybar, who was also 0-for-13 before the single. It was all off Javier Lopez, who hadn't pitched in the series before the 12th and I didn't have a good feeling seeing him in the game.

This was a game the Angels could have put away a lot earlier, but the Red Sox dodged those bullets and nearly stole away a victory. Beckett's outing wasn't encouraging, and you have to wonder just how healthy he is.

The White Sox beat Tampa Bay to extend that series to a fourth game later today. Congratulations to my friends who are Phillies fans, as they wrapped their NLDS series against Milwaukee in four games yesterday, and now meet the Dodgers for the NL pennant.

Tonight's game starts at 8:37 PM and Jon Lester, who now appears to be the Red Sox ace, takes the mound to try to clinch it versus John Lackey. I don't think anyone on the Sox wants another jaunt out to the west coast. And I really don't want another late night game to have to endure on Wednesday night as well.
Posted by The Omnipotent Q at 8:49 AM