The Heart of a Lion 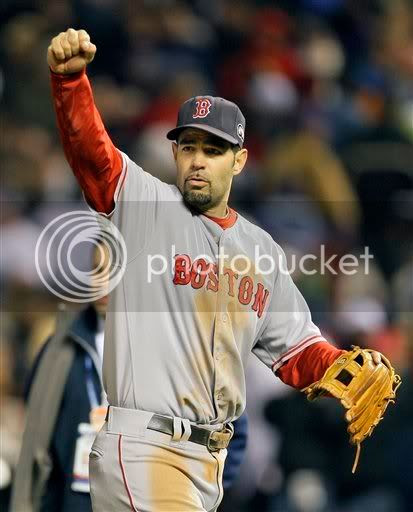 It was sad to see that Mike Lowell was taken off the ALDS roster yesterday, due to the continuing hip problems he's been having. He'll have surgery on it over the winter.

Lowell really tried to make a go of it, but it was clear he just couldn't make it any more. Being taken off the ALDS roster makes him ineligible for the ALCS, and you have to figure if the Sox go to the World Series he won't be active for that either. It was just painful to watch him struggle in obvious pain. There was a grounder hit on Sunday night that a healthy Lowell would have easily gotten to but his injured hip wouldn't allow him to.

I have nothing but the highest respect for Mike, as he is a team-first guy who would do anything to win. But he knew he was hurting the team playing at far less than 100%, so he stepped aside, and rookie infielder Gil Velasquez was added in his place.

Mike Lowell is the definition of a professional major league ballplayer. I hope his surgery goes well and he's back next year at 100%. His leadership on the field will be missed.
Posted by The Omnipotent Q at 10:25 AM