The Shea Scoreboard Comes Down 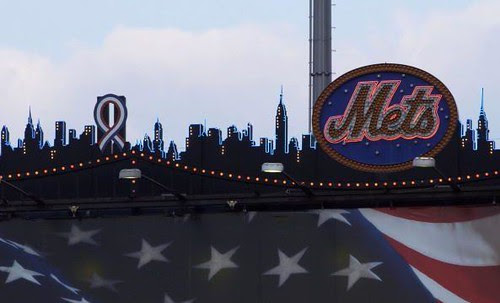 Earlier this week, the Mets officially took down their enormous right field scoreboard, as they continue to take Shea Stadium apart. My friend Jere had a link on his site to a video on MetsBlog, of the scoreboard coming to the ground.

It was sad to see it come down the way it did, as the Mets always had one of the best scoreboards in baseball. You could see every game, who was pitching, and generally it was updated almost instantly. (But I did hate those times I was at Shea and I'd see a Red Sox game with the score the same with the inning not changing for a while. Always made me think something big was going on. And many times it was just some kind of delay in changing the inning.)

And just last night, I was watching the great baseball movie "Bang The Drum Slowly" on TCM, which was partially filmed at Shea back in 1973. I loved the scoreboard shot near the end of the film that shows "The New York Mammoths" (the fictional team), defeating Pittsburgh, 4-2, with all those real ads on the scoreboard I remember, like for Rheingold beer and Banker's Trust. Sure doesn't seem like 35 years ago.

I remember back in my youth seeing a warning on the scoreboard that I'll never forget, as they had some room on the board for it. It said, "NO THROWING OF OBJECTS." (It was of course to the fans to refrain from throwing junk on the field.) They would also occasionally put up a local NBA, NHL or NFL score if one of the local teams was playing an important game at the same time.

There was always a skyline of Manhattan at the top of the scoreboard, and after the 9/11 attacks on New York and the destruction of the World Trade Center, I was glad to see the Mets keep the lost towers on the skyline, and covered it with a red, white and blue ribbon (pictured). Every time I came to Shea afterwards, I'd always make a point of seeing it and say a silent prayer to the victims.

I'm curious to see what the new scoreboard at Citi Field will look like, and I'm sure it will be totally different from the Shea Stadium one. Still, it was a sad to see the big board crumbling to the ground the way it did.

Here's a link to see the scoreboard collapse to the ground, from Matt of MetsBlog, through Jere from A Red Sox Fan From Pinstripe Territory.
Posted by The Omnipotent Q at 1:07 AM