No Dice For Rays 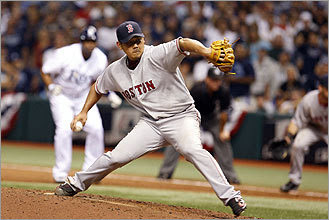 Before he took the mound last night, most of my friends were telling me that they hoped Daisuke Matsuzaka could give the Red Sox five good innings. I felt it could do even better than that.

Dice-K proved my friends wrong, as he went seven+ strong innings at Tropicana Field last night in a 2-0 Red Sox opening game win of the ALCS, putting the Sox in the driver's seat to begin things.

Professor Thom's was a mob scene last night, with the biggest crowd of the year on hand. It reminded me so much of the World Series last year in terms of turnout and intensity.

The Red Sox left men on second and third in the first, as James Shields struck out J.D. Drew to get Tampa Bay out of the jam. Dice-K walked the bases loaded in the bottom of the inning, and like he's done all year, wriggled his way out of it without a run scoring. The opposition is now 0-for-15 against him with the bases filled.

The game remained scoreless until the fifth, when Jason Bay walked and Mark Kotsay hit a check-swing double. Jed Lowrie hit a sacrifice fly to right to put the Red Sox on the board. Dice-K rolled along through the sixth without allowing a hit, while walking four. (I really didn't care about the no-hitter, as I just wanted a victory last night.)

In the bottom of the seventh, Carl Crawford led off with a single to right for Tampa Bay's first hit. I'm just Terry Francona breathed a sigh of relief, as he didn't want Dice-K flirting with history and have to extend him in the playoffs. (You can do that in the regular season, but not now.) Cliff Floyd singled, putting men on first and third, and it look like trouble was ahead. But once again, he pitched out of it without a run scoring.

The Red Sox added another run in the eighth, as Kevin Youkilis, who had three hits, hit a ball off Carl Crawford's glove that brought Dustin Pedroia home to make it 2-0. But that's all the Sox could manage, as they left plenty of men on last night.

But it's all they needed. The Rays had two on and none out in the eighth, as Dice-K put them on to start the inning. It was curious he let him start the inning. Hideki Okajima got Carlos Pena to fly out, and then Justin Masterson got Evan Longoria to ground into a 6-4-3 DP to basically end the night. Jonathan Papelbon got the Rays 1-2-3 in the ninth to give the Red Sox the first game.

The Phillies took a commanding 2-0 lead over the Dodgers in the NLCS with an 8-5 shootout victory in Philadelphia, and that series resumes in LA on Sunday night.

Josh Beckett goes tonight in Game 2 against Scott Kazmir. It's like the Red Sox are playing with the house's money, as they have already accomplished what they needed to (win one of the first two games in Tampa). It will be interesting to see which Beckett shows up tonight. The one who struggled last Sunday at Fenway against the Angels, or the Big Money/Commander Kick Ass Beckett who dominated last year's postseason.
Posted by The Omnipotent Q at 11:11 AM