The Mastery Continues: 11 In a Row 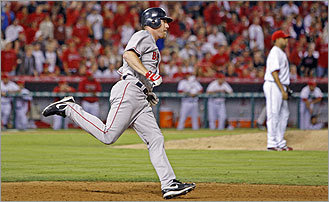 The Red Sox continued their mastery and dominance of the Los Angeles Angels with a hard-fought 7-5 win at Angel Stadium last night. They have now beaten the Angels 11 consecutive times in the postseason, which is a new postseason record of one team over another.

Jason Bay hit another mammoth homer in the first to get things started, and the Sox were up 4-0 as Daisuke Matsuzaka took the mound. LA got one run back quickly, but the Sox got it back in the fourth. The Angels chipped away after that scoring individual runs in the fourth, fifth and seventh.

Daisuke only went five innings, and allowed three runs. It could have been worse, and he slithered out of three major jams with LA only getting three individual runs. The Red Sox had opportunities to add on to their lead in the sixth, seventh and eighth, but got nothing each time. They left the bases loaded in the sixth, two in the seventh, and a man on second in the eighth.

And it caught up with them in the eighth, as Chone Figgins led off the inning with a triple off Justin Masterson to start the inning. (Where was Manny Delcarmen to begin the inning? Masterson walked in a run in the seventh but got out of the inning leaving the bases loaded.) Mark Texeira hit a sacrifice fly with one out off Jonathan Papelbon to tie it at 5.

David Ortiz hit the first pitch off Francisco Rodriguez to open the ninth with a double, and one out later, J.D. Drew hit another memorable blast, a ball when it left the bat I thought was a just a fly to center. The ball carried to the seats to put the Red Sox up 7-5. The homer sent a packed Professor Thom's into a total frenzy. (Rodriguez continues to be one of MLB's most overrated pitchers. Don't be fooled by the 62 saves. Look at his walk totals, 34 this year.) Drew also made a terrific catch off Garret Anderson against the rightfield wall to take a double away from him to end the sixth.

Papelbon got the Angels 1-2-3 in the ninth, aided by two fabulous plays in the field by Kevin Youkilis. He threw out Torii Hunter on a bunt down the third base line, and made a tremendous catch leaning into the photographer's well. The win puts the Red Sox in a commanding 2-0 lead, and can get the sweep on Sunday night at Fenway, as Josh Beckett takes the mound against Joe Saunders. The game on Sunday begins at 7:17 PM.

More and more it looks like we may have a Red Sox-Rays ALCS showdown, as they whipped the White Sox yesterday, 6-2, and are also up 2-0 in their series, which also resumes tomorrow.
Posted by The Omnipotent Q at 10:57 AM