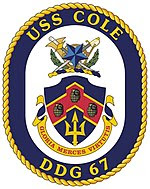 It was eight years ago today at the Yemeni port of Aden that the destroyer the USS Cole was attacked by suicide bombers, killing 17 sailors and injuring 40.

Six of the men who were eventually charged with the attacks, all from Al-Qaeda, were either freed or escaped by the following May.

And he and his murdering bastards did. It emboldened them to "bigger things." The Cole bombing was a dress rehearsal for the worst day in American history...11 months later.

May God rest the souls of those killed eight years ago today, and those that followed the succeeding September.
Posted by The Omnipotent Q at 12:18 PM