"Now I Can Die In Peace" 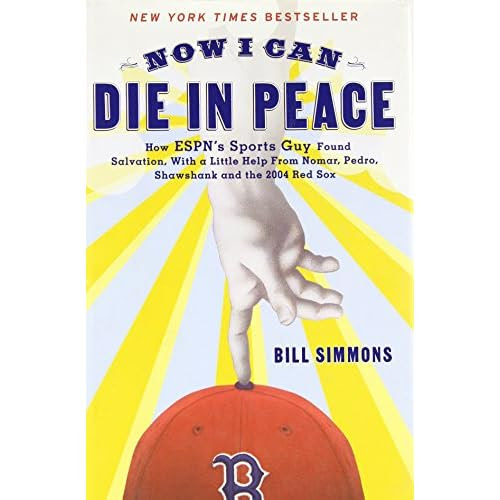 When the Red Sox won the World Series in 2004, an absolute plethora of books came out about their amazing championship run. I read a number of them during the 2005 season, like Mike Vaccaro's "Emperors and Idiots," and Tony Massarotti and John Harper's "A Tale of Two Cities." Both were enjoyable reads (especially the way both books end).

I also read Johnny Damon's book "Idiot," which turned out to be one of the worst sports bio books I have ever read. Peter Golenbock, the real author of the book, did an absolute slipshod job on it, as it was loaded with grammatical and factual mistakes. (And I originally wrote that during the 2005 season, while Damon still wore a Red Sox uniform.) And I have not read Dan Shaughnessy's "Reversing the Curse" book. I'm not sure I really want to put any more money into his pocket.

But I waited to read "Now I Can Die Peace," the book written by Bill Simmons, who writes the popular "Sports Guy" column at ESPN.com. (He originally published the book in July 2005.)When the 2006 baseball season ended, I sat down and read his book.

I should have picked up the book sooner.

"Now I Can Die In Peace" is the best of all the 2004 Red Sox books that I have read. Simmons is like every other Red Sox fan, and his writing reflects it. The book is actually a series of articles he's written going back to 1998, from both his old web site and his ESPN gig. And his writing is filled with references to things like "The Godfather," "The Shawshank Redemption", which are two of my all-time favorite films. (Although there are a few that lost me, like from a few reality shows that I've never watched. But that doesn't take away from the enjoyment of the book.) There are also references to the Patriots, Celtics, various supermodels, and lots of 1980s and 1990s cultural references, many long forgotten. (So whatever did happen to El Debarge?)

I especially like the fact that Simmons writes little asides and footnotes on the left and right sides of the book, basically explaining what he was writing about at the time, or giving an update as to what happened since. (There are over 500 of them in the book.) Some of them in the book are just laugh-out-loud funny.

Simmons is that diehard Red Sox fan/Yankees hater. The kind of guy I know from hanging out at my favorite local saloon. I agree with about 95% of what he writes, especially when he talks about the so-called "curse" and what a bunch of media-driven crap it really was. I really enjoyed his take on the media itself, with all of its writers and reporters and their agendas. Simmons puts it best for all Red Sox fans when he says that winning a World Series would turn his beloved team, "into just another team, and that's just what we all want." Amen.

I had chills running down my spine and was near tears when Bill talks about the Red Sox winning the World Series and its aftermath. I guess that's a true test of any book, and it brought those incredibly vivid memories back to me in a strong way.

I guess the only advantage I had to reading this book two years after the championship was that the paperback version includes and afterword about the 2005 and 2006 seasons (mercifully up until June and doesn't include anything about the team's fall that season). "Now I Can Die In Peace" is simply a must for anyone that calls themselves a Red Sox fan. There's a lot of the heartbreak in it: the 1986 World Series, 2003 playoffs, etc., but comes from a perspective we can all relate to. And of course, it has that satisfying ending (even if the afterword gets a little depressing).

If you haven't read it, I would recommend picking it up, especially if you need something to get you through the long, cold winter months when you're counting down the days until spring training.

Thanks Bill, for writing such a splendid book.
Posted by The Omnipotent Q at 11:06 AM

Pick it up if you get the chance, Kaylee. It's mostly a fun read.

Bill Simmons is awesome...I met him at a book signing at ESPN Zone DC, and I was wearing my Red Sox jersey that was signed by Dicky Barrett of the Mighty Mighty Bosstones who wore my jersey on stage for an encore in DC a few years back. Anyway, Bill used to write for Jimmy Kimmel, a show on which Dicky is now the house announcer guy, and Bill is a huge Bosstones fan, and now my Red Sox jersey is signed by Dicky and Bill, side by side. And it's a great book to boot...