He Wouldn't Get My Vote 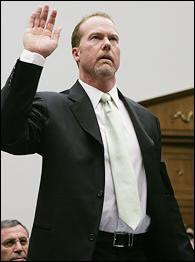 It was revealed yesterday that the ballots for the Hall of Fame were sent out to the baseball writers, who are the voters. Those elected to Cooperstown for next summer's induction will be announced on January 9.

There are two new players who are a guaranteed lock for election. Tony Gwynn and Cal Ripken have incredible baseball resumes, and it's just a matter of how much of the percentage they will both ultimately get (75% is needed for election; they should both get at least 90%).

But the one new name that is to say the least controversial is that of Mark McGwire. When he retired in 2001, it seemed like he was a sure bet to be elected this time around.

That was the day that McGwire and a number of others in baseball went to Congress to testify before a special committee about the rampant use of steroids in the sport. McGwire basically dodged his past, as he is now known for the infamous line, "I don't want to talk about the past" when it came time for his testimony. McGwire came off like a man with something to hide, and incredibly guilty of some past wrong as far as drugs were concerned.

I can only imagine that his lawyers told him not to admit to anything. He couldn't even deny anything under oath, because of a fear that his testimony would one day come back to haunt him. (He probably feared a perjury charge if it was one day proven he had lied that day.)

McGwire has basically become a recluse since his retirement, as he doesn't give interviews for fear that the dreaded "S" word will be brought up. When Jose Canseco's book "Juiced" came out in early 2005, McGwire was fingered by him (as well as many others) as hardcore abusers. I also find it interesting that if McGwire is totally innocent of these charges by Canseco, why hasn't he sued him? Simple. Because in a lawsuit, everything would come out in open court about his possible steroid use, and he can't possibly do that. And NONE of the others named in "Juiced" has sued Canseco either.

I was a fan of both McGwire and Sammy Sosa when they were both going for Roger Maris' home run record in 1998. They both were very likable types, and handled all the pressure with a lot of character and grace. (I remember someone--but I can't recall who it was--saying, "Can you imagine having to root for a jerk like Barry Bonds going for a home run record?)

The Associated Press took an informal poll of voters recently, and it looks like McGwire will have a hard time even reaching 50% of the vote in January. And it may not get better for him as the years go on.

Both Sosa and McGwire have been disgraced by their possible steroid usage. It's a really sad state of affairs, but if I had the vote, I just could see myself voting for McGwire. His silence on the subject speaks absolute volumes.

Mark McGwire hit 583 homers in his career, and normally that would have been an automatic election to Cooperstown. But now it looks like he will be on the outside looking in for a long time to come. That is, unless one day he decides to come out and try to set the record straight.

But by that time, the damage may have done and been irreparable. And it maybe just too late.

That March day in 2005 in Washington will be a day Mark McGwire will long regret for the rest of his life.
Posted by The Omnipotent Q at 7:26 PM

I would not vote for him either.just as I will never vote for Barry Bonds either(he is obviously a cheater)and Cheaters dont deserve to be in the hall of fame.
-kaylee