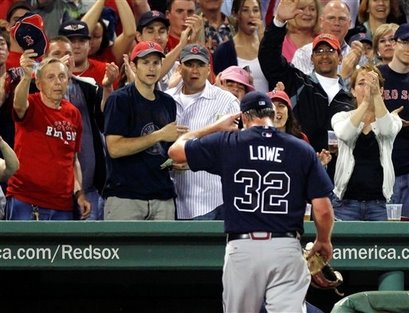 It was absolutely no surprise that Derek Lowe was warmly received by the sold-out crowd at Fenway on Saturday night. It was his first return to the place he called home for seven years, the first since the 2004 Red Sox World Series championship flag was raised and rings were given out on April 11, 2005 (pictured below).

As he was walking across the field from the bullpen after finishing his warmups, D-Lowe got his first standing ovation and acknowledged the cheers. It was another "One of the 25" from 2004 returning to Fenway and the fans gave D-Lowe the ovation he richly deserved. (Although Don Orsillo mentioned during the game that he didn't know how the crowd would react. Was he kidding?)

The night was a pitcher's duel between Lowe and Josh Beckett. For Beckett, I'm sure he was chomping at the bit to get back out there after last Sunday's mess in Philly. And Beckett pitched his finest game of the season (and that's saying something), striking out seven and allowing just five hits and no walks to the Braves in going the distance for his first regular season shutout in a Sox uniform, 3-0.

Interesting that one of the hitting stars tonight was D-Lowe's old batterymate, Jason Varitek. He had two doubles and scored a run, and Nick Green drove in two runs with two hits. Lowe was very good on what was surely a very emotional night for him. Bobby Cox removed him in the bottom 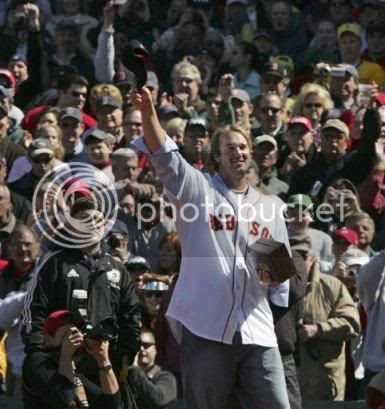 of the seventh, and he received a bigger standing O this time, and D-Lowe acknowledged the crowd with the tip of his cap. (With thanks to Sully Baseball for the photo above.)

The Yankees dropped one in Florida, 2-1, so the Red Sox returned to a three-game lead in the AL East.

Josh Beckett was simply sensational, and put that last rough outing in Philly in the rear view mirror. But once again, a conquering hero returned to Fenway Park, and to almost no one's surprise, the best fans in baseball let Derek Lowe know that his 2004 postseason exploits will never, ever be forgotten in the city of Boston, or by anyone who calls themselves a Red Sox fan.

The Sox also took Daisuke Matsuzaka out of the rotation, and he was examined with an MRI on Saturday to see if he has any damage to his pitching shoulder or arm. I'd bet a DL stint is on the horizon.
Posted by The Omnipotent Q at 12:19 AM

According to WBZ TV, Dice K went to the DL.

Derek Lowe-great closer and great starter. Went from saving 40 games one season to winning 20 games as a starter the next season. No-hitter as a starter and a turbo sinker.

Lowe probably has 2-3 good years left and may pitch into his 40s.

I think that Heathcliff Slocumb for Lowe and Jason Varitek is one of the most one sided trades in Red Sox history.