Beckett Slams, and Gets Slammed 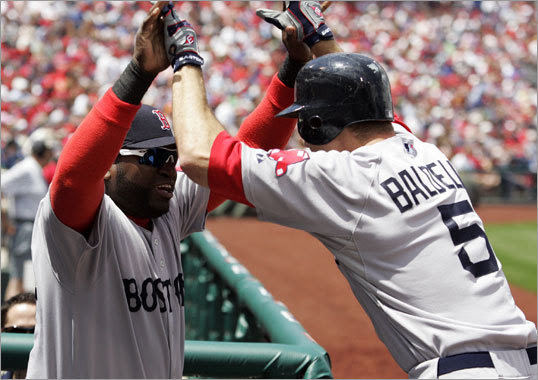 It was a mixed bag for the Red Sox on Sunday afternoon in Philadelphia for the finale of the series against the defending World Series champions. But it was ultimately a dissatisfying result in the end.

Rocco Baldelli and Nick Green belted back-to-back homers off J.A. Happ in the second inning, and the Sox scored four times to give Josh Beckett a 4-1 lead. The way Beckett's been pitching of late, it looked lights out and a sweep was coming.

But the Phillies got to Beckett in the fifth, scoring four times, concluded by a Ryan Howard two-RBI double.

Beckett returned to the dugout rather miffed he surrendered those runs, and took matters into his own hands, blasting a home run midway into the left field bleachers on the first pitch to tie the game again. It was his third MLB home run, and second at Citizens Bank Park. (I had the pleasure of witnessing the other live in person, in 2007.)

But by the seventh, the wheels came off. Beckett allowed a leadoff home run to Jimmy Rollins and after a single, Beckett was done, and allowed six earned runs on the day. His run of five terrific starts came to an end. Daniel Bard came in and couldn't get any kind of command, and allowed four runs. Takashi Saito came in and hit Rollins with the first pitch to force in a run. He also walked in a run. Philly scored six runs and put the game away, 11-6.

It was a rotten ending to a very good weekend. The Red Sox went into Philadelphia and took 2 of 3 from the current World Series champions, and I'll take that any day. Unfortunately, Johan Santana got whacked by the MFY, 15-0, so the Red Sox lead in the AL East is back to two games. (Who would have guessed that an unknown pitcher would have beaten them on Saturday, and one of baseball's best would have allowed 9 runs the next?)

The Red Sox are off today, and the Sox return to Fenway tomorrow to play the Florida Marlins. And before the game, my buddy and New York's Governor of Red Sox Nation, Chris Wertz, will be honored in ceremony along with many other of the Nation's governors. Yours Truly will be watching over the state while Chris is at Fenway.
Posted by The Omnipotent Q at 11:01 AM

Watch Over It & Guide It:

That you shall do well;

You can do a Far-better job as NY Mets GM, than That Clueless Putz, with the 1st name of Omar.