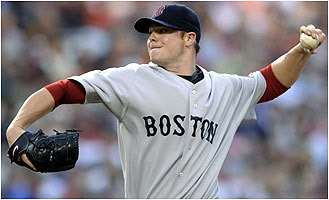 Jon Lester was superb again last night in Baltimore, befuddling the Orioles for seven innings and allowed no runs on five hits as the Red Sox won easily, 4-0. He struck out eight, didn't walk a batter, and was in complete command all night.

J.D. Drew was the hitting star with a triple, single and home run to pace the attack. He hit a triple on the second pitch of the game off Jason Berken and Dustin Pedroia singled him in.

The next couple of innings the Red Sox left five men on base and didn't score, and looked like another one of those nights where they'd regret all the men they couldn't drive in. But in the fourth, they scored three, and it was capped by Drew's two-run blast to right.

The bullpen took over in the eighth, and Jonathan Papelbon came in with two out and two on, as Ramon Ramirez couldn't get the last out. Pap got Matt Wieters to fly to left, where Jason Bay, who was hitless all night, made a sensational sliding catch to preserve the shutout. The pitching continues to be sensational, as the Red Sox now have a 0.69 team ERA in their last four games.

It was an historic night for Papelbon, as his 19th save of the year was also his 132nd save of his career, tying Bob Stanley's team record. Stanley was also a starting pitcher, and many of his saves were also of the two and three inning variety back in the 1980s.