Bustin' Out the Whoopin' Sticks 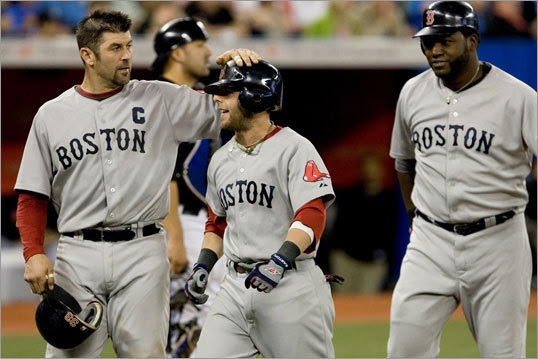 The Red Sox salvaged the weekend series in Toronto on Sunday and did it the old fashioned way: busted out the home run bats. They blasted four, and Jon Lester pitched one of the best games of his career, as the Red Sox coasted to an 8-2 win at Rogers Centre.

The MFY were beaten in the ninth inning at Cleveland on a Jhonny Peralta single, so the Red Sox are back to being a half-game back in the AL East.

Terry Francona put Dustin Pedroia in the leadoff spot, J.D. Drew in the two-hole and Jacoby Ellsbury down in number 8. And it paid off handsome dividends yesterday.

Kevin Youkilis opened the fireworks in the first with a bomb to the right field seats. Lester gave it back in the first and it looked like it was going to be another one of "those days." But He stayed away from the big inning and settled into a nice grove, and set a new career high in strikeouts, with 12. He went six innings, as his pitch count was very high at 115.

The Red Sox put the game away early, as Dustin Pedroia hit just his second homer of the year, a three-run shot that hit the foul screen in left. Later in the game, Youk and Jason Bay went back-to-back (on consecutive pitches) in the eighth to complete the rout.

The Sox get today off, and play the Tigers in Detroit tomorrow night. John Smoltz had another terrific rehab outing yesterday, going five solid innings for Greenville in Single A. He's still on target to join the Sox in two weeks.
Posted by The Omnipotent Q at 11:00 AM