The Smoltz Era in Boston Begins With a Thud 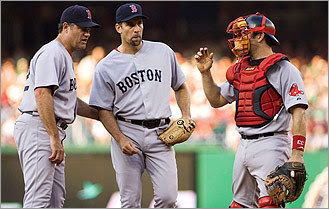 I was hoping that John Smoltz could give the Red Sox five innings last night. Well, he did just that.

It was the five runs he gave up that I was hoping he could avoid.

A rough first inning put a damper on the debut of the future Hall of Famer. The Nationals broke out with four runs off him, after he got the first out. He clearly had trouble keeping the ball down, and the Nats were ready for it. The Nats, despite the woeful record, have a pretty decent offensive team and they showed it last night. Smoltz gave up five runs total, but did settle down after the lousy first inning.

Washington salvaged the last game of the series, 9-3. The Red Sox took two of three in the nation's capital, and I will certainly take that.

He walked one, struck out five on the night. It certainly wasn't the opening the Red Sox or the fans were hoping for, but it was just Smoltz' first start in nearly 13 months. Not an overwhelming success, but not a dismal failure either.

Smoltz' next start will be Tuesday night in Baltimore. The Red Sox lead in the East is now at four games, as New York won in Atlanta last night.

Josh Beckett will open the weekend series with the Braves in Atlanta tonight.
Posted by The Omnipotent Q at 10:30 AM