Beckett Continues His Ownership of the Braves 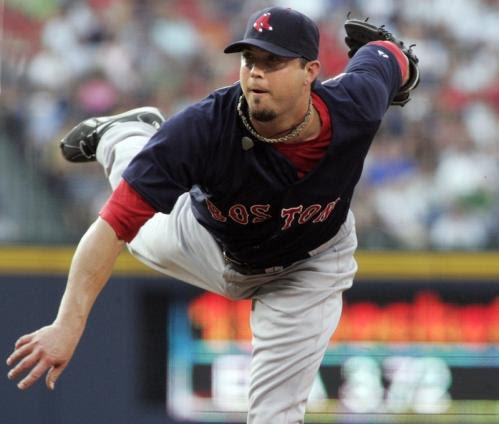 Josh Beckett continued his dominance of the Atlanta Braves last night, pitching seven shutout innings in leading the Red Sox to a 4-1 win in Atlanta last night. For 2009, he has pitched 16 innings against the Braves and allowed no earned runs.

I didn't see any of the game last night, which is an extreme rarity for me. I was with a dear friend for dinner and a movie last night. But as I was in the theater I was thinking that Beckett rolled them over last Saturday in a dominant pitching performance, and I wouldn't be surprised if he was doing it again.

Lo and behold, I was correct.

Beckett is now 6-0 in his last seven starts against the Braves, which goes back to 2005. (He was 2-5 against them from 2001-04.) Beckett was never in trouble last night, as Atlanta only got a man to third once against him.

David Ortiz continued his return to glory last night, hitting a bomb to right to break a scoreless tie in the fifth. The Sox also scored runs in the sixth and eighth, and the shutout was lost when Jonathan Papelbon gave up a home run to David Ross to start the ninth.

Beckett now is 9-3, and you'd bet he's making a strong case for the AL All-Star team right now. The Red Sox are now still four games up, as the Mets played like Mutts last night in handing the Yankees a 9-1 win at Citi Field.
Posted by The Omnipotent Q at 11:53 AM