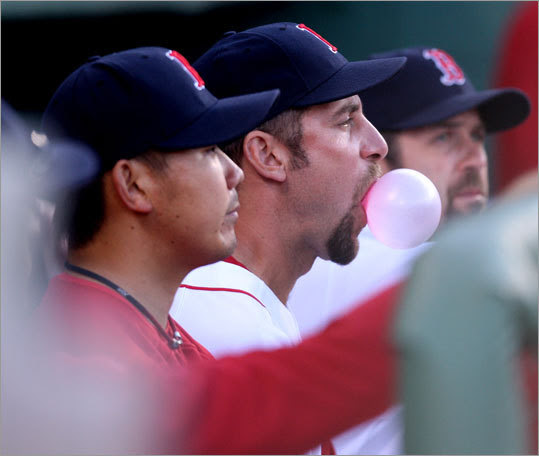 Tim Wakefield made another strong bid to be included on the American League All-Star team as he went six innings in defeating the Florida Marlins at Fenway last night.

Wake is now an astounding 9-3 on the season, and threw 93 pitches in getting the win. He's now 8-0 in his last 9 starts at Fenway Park. Only Roy Halladay has more wins in MLB, with 10. The Red Sox are now an MLB-best 22-8 on their home grounds.

Since Wakefield was available out of the pen over the weekend, he only went six innings. Manny Delcarmen, Takashi Saito and Daniel Bard pitched three scoreless innings in completing the 8-2 win.

David Ortiz may have finally turned a corner last night (fingers crossed, as we've been at this point before), as he hit a bomb to right for his fifth homer of the year, and in the same six-run fourth inning, hit a two-run single. On his first at-bat in the second he hit what appeared to be a ball heading for the bullpen, but was caught right at the warning track. Papi continues to swing the bat well and with authority.

The Red Sox announced that John Smoltz will make his final rehab start tonight at Pawtucket, and will make his first Red Sox start next Thursday night against the Nationals in Washington. The Red Sox will be going with a six-man rotation for the time being. It's not a long term solution, as the starters need work and it would create too much down time for them. Plus going with another starter would deplete the bullpen by one. It will be interesting to see how all this pans out.
Posted by The Omnipotent Q at 10:39 AM

Amazing. Wakefield had been an innings eater for years. Now, he has been a saving grace.

His effectiveness has been enhanced by the Red Sox bullpen. Wake goes six innings and save his body over the longer term.

BTW I will be in DC next Thursday night. It will be interesting to see what Smoltz can do.