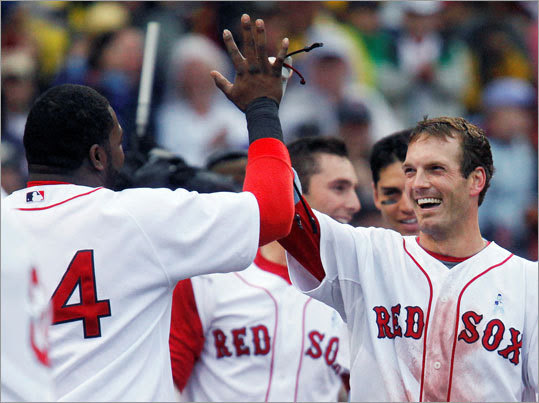 Nick Green ended a windy and rainy afternoon at Fenway yesterday with a what on a normal day would be a bloop double to right, but the wind gods were behind the Sox and it landed in the right field seats around the Pesky Pole for a 6-5 win over the Braves and a series win.

Tim Wakefield gave up two runs in the first on Brian McCann's double, but they answered with three in the bottom of the inning, topped off by David Ortiz' sixth homer of the season, a two-run blast to left made even more special by the fact he hit it through a swirling wind.

It was 4-2 in the seventh when the Braves tied it, and Wakefield officially got a no-decision. Ramon Ramirez, who has been less than stellar recently, allowed the tying run to score after coming in with two on, and Kevin Youkilis saved his bacon when he corraled a line shot down the third base line for the final out.

The Red Sox grabbed the lead in the bottom of the inning on a hits by George Kottaras and J.D. Drew. The Braves went ape when Drew drove in the run, as he appeared to be struck out on a previous pitch. Home plate ump Bill Hohn tossed Bobby Cox, Chipper Jones and Eric O'Flaherty from the game.

Atlanta tied it in the eighth off Hideki Okajima, and Jonathan Papelbon left the base loaded in the ninth, but the fans once again through his high-wire act. This set up Nick Green's heroics, as he took Jeff Bennett's first pitch to the right field seats for the win.

The Yankees dropped the series in Florida to the Marlins yesterday, so the Red Sox are now 4 games up in the AL East. The Red Sox are off today and start a series with the Washington Nationals Tuesday night in D.C., with Brad Penny opening the first game.
Posted by The Omnipotent Q at 10:44 AM