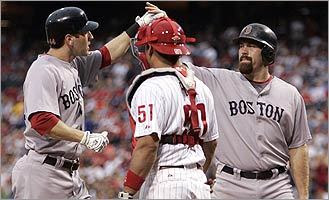 On a night filled with rain in Philadelphia, there were also lots of home run balls flying out of Citizens Bank Park as the Red Sox marched to their fifth straight win, 11-6, and their sixth consecutive win away from Fenway Park.

Jason Bay blasted one to dead center in a five-run first, which included three Philly errors (strange as they lead MLB in fielding percentage). Then the next inning, the rain came and held the game up for nearly 90 minutes.

After the game resumed, Daisuke Matsuzaka seemed to determined to get the Phillies back in the game, as he gave up home runs to Raul Ibanez and Pedro Feliz. It was 5-4 after 4 innings and Terry Francona made the wise move to pull Dice-K, who continues to be the weak link in the Red Sox' rotation. The Sox added to their lead in the fifith to make it, 8-4.

Manny Delcarmen had a shaky fifth, allowing a run and stranding the bases loaded to end the inning. But from there, the rest of the bullpen allowed just a harmless home run to Jayson Werth in the seventh (by Hideki Okajima).

Jacoby Ellsbury homered in the ninth to cap the scoring. Julio Lugo, back in the lineup, had four hits. Ellsbury was on five times, and Mike Lowell had three hits to pace the attack.

Granted, the rain delay hurt Matsuzaka, but he is now averaging less than five innings per start since his return from the DL. With John Smoltz set and ready to join the Red Sox shortly, the club has a decision to make. I seriously doubt Dice-K would end up in the pen, though.

The Red Sox are now three up in AL East, as the Mets bounced back nicely from that Friday night disaster, as little-known Fernando Nieve shut down the Yankees in The House The Taxpayers Built, 6-2. Josh Beckett goes for the sweep this afternoon in Philly.
Posted by The Omnipotent Q at 11:31 AM

The House That Taxpayers Built is a Cheap Looking Bandbox:

No Homers to RF, there & LF looks awfully like a LL Field, with phony distances, which I suspect are 5 to 10 feet shorter than marked.