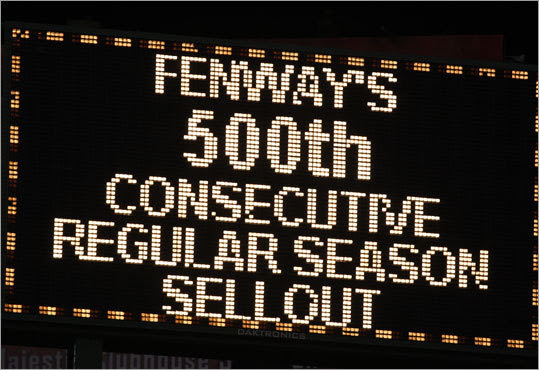 It was an historic night at Fenway Park on Wednesday night, as the Red Sox had their 500th consecutive sellout, which continues to be a MLB record. And they also celebrated in style with their fans, as they clipped the Florida Marlins, 6-1.

The Red Sox, who have the fourth longest streak in sports history, still have a ways to go to break the all-time record for North American sports, which is held by the Portland Trail Blazers of the NBA. They sold out 744 straight games from 1977-1995. The Red Sox could reach that by the end of the 2012 season. (The Boston Celtics and the Chicago Bulls are the only other teams to have reached the 500 mark.)

It was also a memorable night for Brad Penny, as he won his 100th career game. It was a struggle at times for him, as he threw 100 pitches in five innings. The Marlins had him on the ropes the entire game, but could never get that clutch hit. But Penny got through it, such lots of grit and determination. The Sox bullpen was their usual splendid selves, pitching four scoreless innings in getting him his win.

Jacoby Ellsbury opened the first inning with his first error of his career, after 232 straight games and it led the the only Florida run. But Ellsbury drew two walks (his walk total has been going up lately), and hit home run later in the game. Dustin Pedroia busted out out of the funk he was in with three hits and three RBI and two stolen bases. They were the offense last night, as Kevin Youkilis struck out three times against Andrew Miller and Jason Bay took the collar.

The number 500 were etched into the outfield and the Red Sox gave away gifts to the fans in-between innings to thank the fans for their support. It was a festive evening for the Nation, and made more fun by the fact that the Washington Nationals, a 17-46 team, beat the Yankees in the Bronx last night behind New Yorker John Lannan's terrific pitching. The Red Sox are now 3 games up in the AL East.

The weather may play a role in tonight's game, as it is raining throughout the Northeast today. Jon Lester is scheduled to get the start tonight if Mother Nature cooperates.
Posted by The Omnipotent Q at 12:00 PM

I picked The Nats when they came to The District in 2005. A real fan stays and boy that team has tested me.

The tenor of the NYC tabs has probably been "There is no way that The Yankees can lose to The Nationals. It will be a monumental embarrassment if that happened."

Well to the staff of "the Daily News": Up yours. I sweated because Lannan was great. He has been pitching well most of the season. But alas no run support, terrible defense, and a terrible bullpen torpedoes anyone.

Lannan pitched the game of his life tonight and the 'pen actually held it! The moment the pen appears I wonder "how do they blow this one?" usually.

John Lannan, Sharon Martis, Elijah Dukes, and Ryan Zimmerman are the building pieces. I focus on those guys for hope.

It was a pleasure watching the Nats hold on for that win last night. I thought for sure the MFY would pull that game out. Good for John Lannan. He pitched a helluva game and deserved the win.

I've had my own issues with the Daily News over the years, too. As the manager of the Indians said in "Major League" about sportwriters (and I'm paraphrasing): "Let's give them all a nice big shitburger to eat." Hope they enjoyed the taste.

I thought before the series if the Nats could take one I'd be really happy. Thanks, guys.