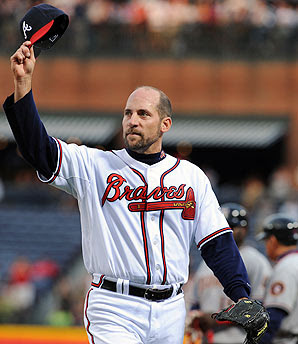 John Smoltz was on the radio with Dan Patrick today, and mentioned he thought his first start in a Red Sox uniform might be next week against the Washington Nationals in D.C. He also said he'd make one last rehab start before joining the big club.

Then Patrick made a parallel between him and Brett Favre (side note: I wish the Vikings would just drop this idea of thinking Favre has anything left entirely!). And this humorous exchange took place (with thanks to Extra Bases):

Patrick: "You're sort of the guy who won't go away. You've got a Hall of Fame career, you've got money, you've got everything but hair. And you could walk away right now. Do you understand what Favre's going through by wanting to play again?"

Patrick: "Yeah, but he had arm surgery and wanted to come back and play. He's had a Hall of Fame career. You don't see any parallels between you two?"

Smoltz: "No, because I didn't come out and say I retired."

Patrick: "But people said that you should probably."