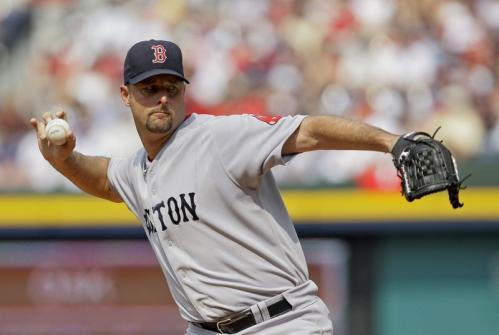 Did you ever think you'd see a blog post of mine with that title, in the Year of Our Lord 2009?

Tim Wakefield continues to make a strong case for being on the 2009 All-Star team, as he pitched six more magnificent innings over the Braves yesterday, and got his 10th victory of the season as the Sox won a 1-0 nailbiter in Atlanta yesterday.

Wake also tied Roger Clemens for the most starts ever by a Red Sox pitcher with 382. He is now 18 wins behind the Texas Con Man and Cy Young for the all-time team record for wins, as his victory yesterday was number 174.

He also joined Roy Halladay and Kevin Slowey as the only 10-game winners in MLB.

Simply amazing. Wake continues to be The Man.

The knuckler was dancing in Atlanta yesterday afternoon in the 95 degree heat, as Wake gave the Braves just three hits. Ex-Brave Mark Kotsay's RBI single in the sixth was the only run of the game, driving in Kevin Youkilis. The bullpen was its usual stellar self, as Manny Delcarmen, Justin Masterson and Jonathan Papelbon shut the Braves down the rest of the way.

The Red Sox remained four up in the AL East, as the Mets didn't bother showing up at Citi Field, getting only one hit and the Yankees won easily, 5-0.

Brad Penny takes the hill today, as the Red Sox go for the sweep and interleague comes to a merciful conclusion.
Posted by The Omnipotent Q at 11:55 AM

I want to see him there but he will need one more win to make it. With a 4.19 ERA, the 2nd highest run support in the AL and the mandate that every team be represented will leave him out with 10 wins. I know it seems crazy, but I fear it is reality. He shoudl have 2 starts before the all star break so I hope it is a moot point.

You may very well be right, Dan. Two more quality starts could put him in for sure. I don't want to think where the Red Sox would be without Wake's contribution this year.