Good Thing Beckett & Lester Have Picked It Up 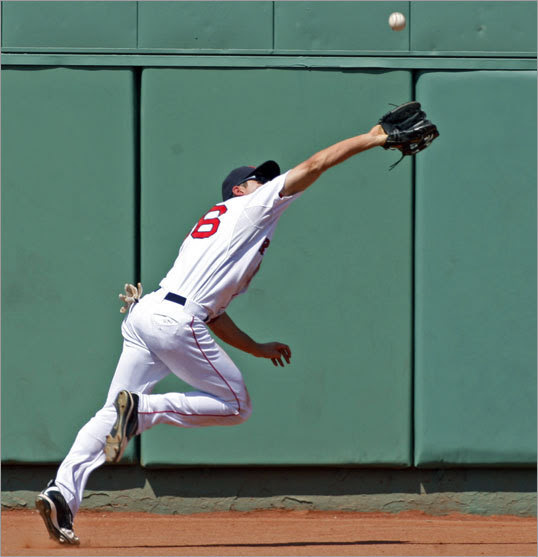 Daisuke Matsuzaka turned in another mediocre-to-lousy performance on Sunday, and the Texas Rangers took advantage, winning 6-3 and taking the series at Fenway from the Red Sox.

Matsuzaka gave Texas four runs in the first three innings, including a home run to the red-hot Michael Young. He walked none but allowed ten hits, and the league is hitting an astounding .349 against him in his last four starts. He seems the exact opposite pitcher than from 2008. The Red Sox had only one really big opportunity to get back in the game, in the third. Ian Kinsler's error brought in two runs, and the Sox had the bases loaded with one out. But Jason Bay struck out and Mike Lowell grounded out to end the inning.

Vicente Padilla only allowed a Mark Kotsay home run, and that was it for the day. Dice-K gave up five runs in total, and Hideki Okajima gave up a homer to Nelson Cruz to finish the scoring.

Jacoby Ellsbury made a sensational catch in the Triangle (pictured), and slid on his shoulder, and wound up leaving the game shortly after. He had slightly injured the shoulder sliding into second the previous inning. Ellsbury is questionable for tomorrow night's game. J.D. Drew had a cortisone shot in his ailing shoulder but says he's ready to go tomorrow night.
Posted by The Omnipotent Q at 11:54 AM

Man, I watched the game on TBS yesterday and two things occured to me.

1. Ron Darling is a great analyst. Insightful, articulate (especially about pitching) and a drey sense of humor.

David Wells was needling Ron about his lack of a "Bahstan" accent. Darling responded "If we go to dinner, it will sound like the set of 'Good Will Hunting'"

2. What was David Wells doing in the same booth as Ron Darling? Wells is terrible. No flow, whining about the same topic without pause.

I agree about Darling but disagree about Wells. I watched him a few weeks ago and he showed me some potential. Not afraid to offer opinions and showed his wacky sense of humor. He's new to the booth so it will take him time find his stride.