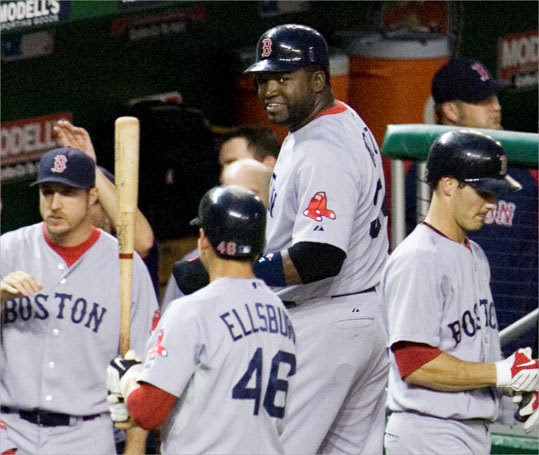 The Nats gave the Red Sox another good game at Nationals Park last night. Washington took an early 1-0 lead in the second off Jon Lester, which included a fluke single by Elijah Dukes, in which the bat and ball arrived at Nick Green at short at the same time. Fortunately, he was able to avoid the bat. It landed in the outfield with the broken part of it in the grass and the bat standing straight up. Very weird.

Craig Stammen retired the first nine hitters before Dustin Pedroia doubled down the left field line. I was watching the game on the Nats feed last night and they speculated that the second time around the lineup for Stammen would be the true test. And the Red Sox responded. With two on and two out, Stammen hung a changeup to David Ortiz on 3 and 2 and the old Papi responded by crushing the pitch to dead center to put the Red Sox out front to stay. It sounded like Fenway Park as the ball sailed over the wall, as I'd bet more than half the fans last night were from Red Sox Nation. It was Ortiz' 7th homer of the year, and he's now hitting .342 since he turned it around, during the Yankees series over two weeks ago.

Jason Varitek added a two-run bomb later to make it 6-1. Jon Lester wasn't overly sharp, but pitched six effective innings and left with the score 6-3. Justin Masterson allowed a run in the seventh, as the pesky Nats wouldn't go away. They had two on and two out in the eighth when Hideki Okajima struck out Ronnie Belliard.

Jonathan Papelbon gave us a stress-free 1-2-3 ninth inning for the save, and a 6-4 win. The Sox remained five up, as both the Yankees and Blue Jays won their respective games last night.

Tonight the Red Sox will debut a future Hall of Famer, as John Smoltz takes the hill for the Red Sox for the first time. He hasn't pitched in 387 days, since last June with the Braves. I would bet that Terry Francona is hoping for five innings from Smoltz, and then turn it over to his bullpen. It should be an interesting night no matter what.
Posted by The Omnipotent Q at 12:16 PM