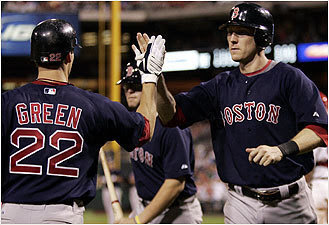 That travesty in the Bronx put a bit of a damper on what was a tough, grind it out, 13-inning win by the Red Sox in Philadelphia last night. It was the battle of the last two World Series champions, and it was a terrific game. But it really should never have gone to extra innings.

Jon Lester was simply superb last night. Seven innings, 11 strikeouts and allowed just one run on two hits. Of the last 19 hitters he faced, he retired 18 of them, 10 on strikeout. Lester seems to have put all his early season struggles behind him, and has kicked it into high gear now.

But he didn't get the win. Terry Francona elected not to use Jonathan Papelbon a third straight game, so he turned the ninth inning over to Ramon Ramirez. But with one out, he tossed a meatball down the middle of the plate to Ryan Howard and he simply killed it, tying the game. It's the third HR ball Ramirez has allowed in the past two innings.

Kevin Youkilis and J.D. Drew both went deep for the first two runs (and I'm sure the Philly fans enjoyed seeing Drew go deep). In the thirteenth, the Red Sox blew it open with three runs (after being retired in order the previous three innings), which included RBIs by Jacoby Ellsbury, Mike Lowell and a sac fly by Nick Green.

Daniel Bard came on for the save, and while allowing two base runners to bring up the tying run, he struck out Chase Utley, Ryan Howard and finally, Shane Victorino to end it. It was an impressive performance by the rookie.

The Red Sox have now won four straight, and 9 of 11, and are still two games up in the AL East. Daisuke Matsuzaka gets the start at Citizens Bank Park tonight.
Posted by The Omnipotent Q at 11:39 AM