Did You Notice That Papi Has a Better BA Than Slappy? 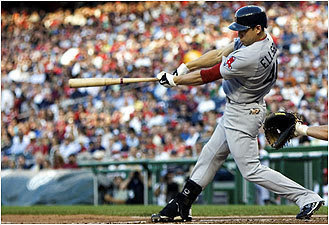 It was a tight game in D.C., as the last-place Washington Nationals gave the Red Sox a fight last night, but the boys from Boston came out on top, 11-3.

I said to a friend of mine before the game that teams like the Nationals, with MLB's worst record, scare the hell out of me. These are the games the Red Sox could have a letdown, that they might take for granted that it's an easy win.

John Lannan of the Nats pitched well, allowing just three runs in six innings, before a record crowd of 41,517 at Nationals Park. The game was 3-3 going into the seventh. But once it got down to a battle of the bullpens, it was simply no contest. The Red Sox pummeled the Nats pen for eight runs in the last three innings, highlighted by Jason Bay's two-RBI single and Jacoby Ellsbury's two-RBI triple. It was a big night for both, as Bay also hit a homer in the second and had four total hits. Ellsbury also had four hits and two triples. He also swiped his 30th base, and became just the fourth Sox player ever to steal at least 30 bases in two straight seasons.

Brad Penny pitched well after a shaky start, when Washington scored the first run of the game in the opening inning. He gave the Sox his usual type of start: 5 2/3 innings, 3 earned runs, six strikeouts. Manny Delcarmen relieved him in the sixth when the Nats tied the game and wound up the winning pitcher.

The Red Sox pulled to a five-game lead in the AL East, as the slumping Yankees were shutout in Atlanta by the Braves, 4-0. BTW, did you notice that David Ortiz (who had last night off), now has a higher batting average (.213) than Alex Rodriguez (.207), who is currently in a 1-for-23 hole? (Granted Slappy missed the first five weeks of the year.) Right now Papi is on the upswing this month while Rodriguez, who is 9-for-63 in June, is in a huge valley.

Funny that I haven't heard any of the usual pundits talk about how Slappy, who is four months older than Papi, could be "washed up." Well, at least not yet.
Posted by The Omnipotent Q at 11:24 AM

Perhaps that is because BA is not the only important statistic in baseball and in every other statistic ARod is killing Ortiz?

No, just that Papi is on the way up and Slappy is a huge funk and Papi passed him in BA. I'm not saying Papi is having a better year than Slappy. The point of this being the rumors of Papi's demise have been greatly exaggerated, bud.