D Train Goes Off the Rails 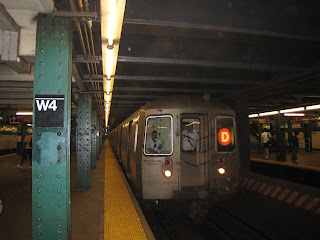 Well, not that D train (above). The one below.

It didn't look good in the beginning for the Red Sox. Tim Wakefield allowed the Detroit Tigers three runs in the second inning in yesterday afternoon's finale to the road trip at Comerica Park. I was thinking this was a "playing with the house's money game," as the Red Sox had won the series and clinched at least a .500 record on the ten-game road swing.

The former 20-game winner looked good in the first two innings, retiring the first six. But then he hit Jacoby Ellsbury, and then the wheels really came off. He proceeded to walk five batters, and two with the bases loaded. Jim Leyland pulled the plug, and got tossed from the game while doing so after agruing with the home plate ump over one of his calls. It was also one of the few times I can ever recall a pitcher being removed from a game because of ineffectiveness who had not allowed a hit.

It's sad to see what has happened to the affable Willis' career in recent years. He was on the DL this season with anxiety disorder, and overall has not pitched well. He remained upbeat after the game, but his spot in the Tigers' rotation is definitely in jeopardy.

The Red Sox went on to score four more runs after Willis left, which included a two-run double by Jason Bay. Then Tim Wakefield went back to work, and went 6 2/3 innings, throwing just 80 pitches. Justin Masterson picked him up from there, and Jonathan Papelbon once again put runners on before slamming the door in the ninth in locking up the 6-3 finale. (My friend John had a good point yesterday. Isn't it interesting that the only pitcher in the Red Sox bullpen that right now makes the Nation nervous is Papelbon? Everyone else is pitching extremely well, although Pap has still blown just the one save.)

The Red Sox are currently tied for the AL East with the Yankees, as they came from behind to beat Texas on Thursday. Guess which AL team right now has the most home games left on the schedule? Yep, Your Boston Red Sox.

Kevin Youkilis left the game yesterday with a tight calf muscle. He's day-to-day, and it's not believed it has anything to do with the slight injury he suffered to his ankle on Wednesday.

David Ortiz is getting his eyes checked in Boston. He hasn't complained about any vision problems lately, so I would guess it's just one thing he wants to eliminate from his list of what could be contributing to this mystifying decline to his career.

Weather doesn't look good for tonight, as the Red Sox open a series at Fenway with the Texas Rangers. Brad Penny gets the ball if the rain holds off.
Posted by The Omnipotent Q at 11:07 AM

I call him the P Train, because of that time cops caught him urinating in public.

Hey, I like the Boston/NYC pic. Probably no one has noticed this, but if you look closely at my blog's banner, I have a similar thing. On the left you can see my crude drawings of the Pru and Fenway, and on the right, the NYC skyline.

I never noticed that, Jere. Cool stuff. I thought my blog could use some updating, and I like the changes my friend John put together...