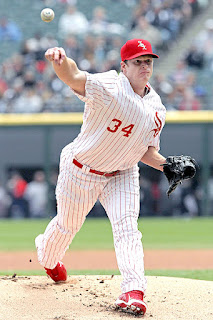 The Red Sox ran into a buzzsaw on Sunday in their attempt to sweep the White Sox and the seven-game midwest road trip.

Gavin Floyd (pictured) retired the first 14 batters of the game before he walked Cody Ross. The no-hitter was still intact until the 7th, when Dustin Pedroia hit a clean single. The Red Sox got their first run on David Ortiz' double and Ross single. They had the opportunity to tie the game up, but left runners at second and third.

Josh Beckett had a very inauspicious start, giving up three in the first, including a two-run shot by Adam Dunn. But Beckett settled down, and left with the game at 3-1 in the bottom of the seventh.

Chicago added another run in the 8th, and that was it at 4-1.

I watched the entire game with the TV muted, as Extra Innings had the White Sox feed. As I have mentioned before, I find Ken Harrelson's brand of broadcasting a game to be the absolute worst, as I can't listen to any announcers openly rooting for the teams they cover. So I put on some music while I watched the game. It made watching a far more enjoyable experience.

But I did like those retro early 1970s uniforms the White Sox wore on Sunday (pictured). BTW, does any team in the majors change their uniforms more often than the White Sox do?

The Red Sox now head home at 10-11 for 2012, coming off a 6-1 road trip. Their bats were shut down in the final two games, scoring just two runs. But they got a win out of those two games, so I won't complain too loudly about that. They return to Fenway on Monday against Oakland.
Posted by The Omnipotent Q at 10:17 PM