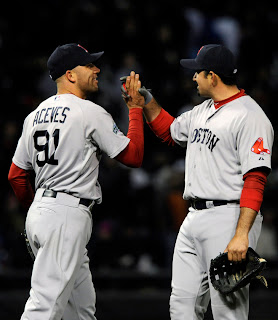 The Red Sox got back to .500 last night as Jon Lester pitched a gem, and Alfredo Aceves was money in the ninth, as the Red Sox won their sixth straight in Chicago, 1-0.

Unfortunately, it was another of those games I had to follow on my iPhone, as I was playing softball last night, but every time I checked, the news was good.

Lester did have to escape a jam early on in the first, and had to throw 122 pitches in seven innings. But it was a gutty performance, showing why he is one of MLB's best lefthanders.

All he needed was an RBI single by Adrian Gonzalez in the fourth inning, as he drove in Ryan Sweeney, who had opened the inning with a double.

Jake Peavy showed the form that made him one of MLB's best righthanders before he was hit with injuries the last couple of years for the White Sox. He went all the way and allowed just three hits, and Sweeney was the only Red Sox player to reach past first all night.

It took until Game 40 in 2011 for the Red Sox to get back to the .500 mark after the absolutely abysmal start (thanks Allan and Jere for the info), and this year they get back in half the time. (Although the Sox didn't start off as badly in 2012).

The Red Sox are still in fifth place, but are just 2 1/2 games out, and go for a perfect 7-0 road trip today with Josh Beckett taking the mound at The Cell.
Posted by The Omnipotent Q at 10:42 AM