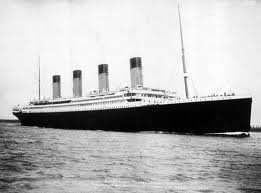 This Tuesday night, Professor Thom's Trivia will feature "Maritime Disasters Trivia," seven questions about ships that met terrible fates at sea. We're doing it in honor of the 100th anniversary of the Titanic's fateful collision with an iceberg in the North Atlantic, which is this coming Sunday.

The Sneak Peek question for this week is:
"The three famous cartoon 'Chipmunks' were named Alvin, Simon and what other name?"

We get started just after 9 PM. The Red Sox will be playing the Blue Jays in Toronto that night, and it is Daniel Bard's debut as a starting pitcher. (And no, I don't think the team will panic and make him the closer by then.) Hope to see many of you Tuesday night for Trivia. Get in early, as tables have been going quickly lately.
Posted by The Omnipotent Q at 11:09 AM