A Day For Memories 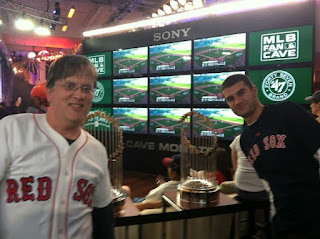 It was an incredible day on Friday, at both Fenway Park and Greenwich Village.

The Red Sox hosted an amazing ceremony before Friday's game, bringing out more than 200 former players, coaches and managers to honor Fenway's 100th birthday. With the scores of "Field of Dreams" and "The Natural" both playing, Jim Rice was the first player to come out, from the left field garage, and he was followed by Dwight Evans and Bill Buckner (without the stache!). The players came out just with the music and their identifications on the scoreboard.

To no one's surprise, Terry Francona got the biggest ovation of anyone on the day. Players kept coming out and coming out, many of whom I did not recognize. (The Red Sox were smart putting their last names on their old home jerseys.) Pedro Martinez and Bill Lee seemed to enjoy their entrances more than anyone.

And Carl Yastrzemski made the final entrance, coming out of the first base dugout.

The former players all took their positions on the field, were met by the current Sox players, and then met in the middle of the field in one huge gathering of family. Combine that with the closing music from "Field of Dreams", and Yours Truly was wiping away a few tears.

It was truly well-done, on a 100th birthday fitting for America's Most Beloved Ballpark. Here's the complete list of all the players, coaches and managers who were in attendance. (To no one's surprise, Roger Clemens, Grady Little, Don Zimmer and Mike Torrez were not on the premises.) My friend Jere was up in Monster Seats yesterday, and has many cool pics of the event.

I spent the afternoon at the MLB Fan Cave, taking in the ceremonies with many Red Sox fan friends of mine in a special celebration there. The two recent Red Sox championship trophies were there (they were the Real McCoy and the above pic is of me and my pal Alex) and everyone enjoyed the day (that is until the first pitch was thrown). After it was over, we were given a really cool ditty bag of gifts: a t-shirt, the 2004 and 2007 World Series programs, a drinking mug, some dirt from Fenway and two tickets to a game this season. (I got a game against the Twins on August 2.)

As I have previously mentioned, the MLB Fan Cave is the former home of Tower Records, where I worked for six years in the 1980s. I had been there last year, but they had changed a few things around since then. Everywhere I looked brought back memories of a generation ago. I watched a good part of the game in the basement level, where the old cassette department was. There were couches and TVs, and told my friends some stories of when I worked there.

I was most surprised to see that the old receiving department had been converted into a kitchen, and the old countout room next to it was now a bathroom. I went into it and couldn't believe that I had once counted money there!

It was incredibly bittersweet. Back then was an incredible part of my life that I look back with a lot of affection. (I didn't take any pictures of those rooms. I was torn if I should or not, but decided against it.) I thought of all those wonderful friends I made in my time at Tower, and was thinking especially of those friends who have left this world in particular.

I couldn't help but smile when I saw the two championship trophies in the middle of what used to be the rock floor. I was in that exact spot when the Red Sox were losing Game 6 of the 1986 World Series, and took a lot of crap from many people for years. And a generation later, here are not one but two Red Sox championships on display.

Above and beyond surreal.

And yes, there was a game yesterday.

I'm not going to talk about that. I don't want to ruin what was a very nostalgic day in my life.
Posted by The Omnipotent Q at 11:06 AM