No Tito At Fenway Next Friday 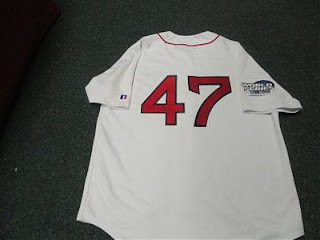 The hurt is deep, and still very raw.

Terry Francona said earlier this week that he will not be a part of 100th anniversary celebrations of Fenway Park next week. He told the Curly Haired Bastard (known also as Dan Shaughnessy) that he'd feel "a little bit hypocritical" going back to Fenway now and "start hugging people."

Tito, who his currently working on a book with CHB about his time as Red Sox manager, will be at Fenway the following Sunday (the 100th anniversary celebration will be on Friday) as an analyst on the Sunday Night Baseball game on ESPN. The Red Sox are inviting every living former player, coach and manager to the ceremonies. (I wonder if Roger Clemens or Grady Little be there?)

Tito says that both John Henry and Larry Lucchino reached out to him, but declined both invitations. He even said that his conversation with Lucchino evolved into an argument between the two.

I can understand Tito's feelings on this subject. He feels he was stabbed in the back by someone high up in the Red Sox brass, and if it wasn't one of the owners, he feels that they did nothing to root out who it is. It may have cost him the Cardinals manager job, which he interviewed for right after the "dirt" about his marriage failing and rumors of a pain pill addiction surfaced.

It will be interesting to see the fans reaction next Friday when the Greatest Red Sox Manager In My Lifetime is not present, and will there be any signs in support of Tito. I'm betting there will be.

I hope the wounds will heal soon, and I'm still betting we will see Tito in the dugout of another team as manager of an MLB team in 2013.
Posted by The Omnipotent Q at 12:13 PM