Ross To The Rescue 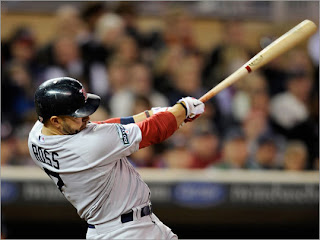 Cody Ross gave the Red Sox a huge boost last night, blasting the tying and game-winning home runs as the Red Sox came from behind to beat the Twins, 6-5.

Jon Lester had one bad inning, the fourth, when he gave up four runs, including a two-run homer to Danny Valencia. He settled down and retired the final seven he faced after Minnesota added another run in the 5th.

The Red Sox got their first five runs off Jason Marquis, whose last appearance against the Red Sox was fairly notable: the Sox beat him 3-0, on October 27, 2004 to win their first World Series in 86 years back in 2004.

In the 8th, Franklin Morales allowed a triple to Jamey Carroll and my first thoughts were "here go the Bullpens Arsonists again." He got one out, and then Bobby Valentine brought in Daniel Bard, who got the Sox out of the inning unscathed with a lineout and popup.

Ross put the Sox ahead with a two-out home run to right. Valentine brought in Alfredo Aceves, who allowed just a single in getting the save. (But that second out, a long fly to left that I thought was gone, had me holding my breath.)

Valentine said after the game that Bard maybe used for another inning in the Minnesota series, but he will definitely make his next start on Friday night in Chicago.

On that subject, I don't see where the Red Sox have any other real choice but to keep Bard in the bullpen. Aceves has been simply brutal in the closer role, and would be better served setting up along with Scott Atchison. Andrew Bailey won't be back until the All-Star break, and Mark Melancon is working out his problems at Pawtucket (and has pitched well so far), so you don't know when he'll be back.

You can't trade for any kind of decent bullpen help right now, as no team will move anyone until July 31st at the earliest. Bard's future is definitely as a starter, but in the short-term, he should be working out of the pen. Aaron Cook has pitched well at AAA, and can (and probably will) declare his free agency on May 1st if he is not in Boston. Until the pen settles down, keep Bard where he is for now.

And also, you may have heard this story out of the NY Daily News the other day from jackass sportswriter Bill Madden (sorry, I don't respect this guy, never have) about the "blow-up" Bobby Valentine had with Mike Aviles in the first week of spring training, and how the players forced Bobby V to "apologize" to him shortly afterwards. Sorry, I don't buy this at all. Why? Do you really think a story like this would have escaped the vultures in the Boston media, who've been on a feeding frenzy since last September? And it took a New York tabloid writer, a devout Red Sox hater, to break this? Sounds very fishy to me.

Anyway, the five-game losing streak is over, and Josh Beckett takes on the Twins tonight at Target Field.
Posted by The Omnipotent Q at 11:45 AM