Not a Bad Debut In The Rotation For Bard 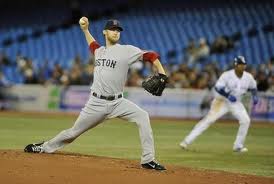 I was doing Trivia last night, so I was bit preoccupied and missed a good part of Daniel Bard's debut last night in Toronto's 7-3 win.

My friend Dave, a fine lawyer and sabermatrician, sent me an email last night about his start, and I'll share it with you. He thinks Bard was better than it may at first appear:

A)  Got hit hard three, maybe four times (the two line drive singles, the line-out, possibly the grounder that rolled for a double);
B)  Walked one;
C)  Did not effectively control the running game;
D)  Threw 96 pitches before getting an out in the 6th;
E)  Allowed a high number of batter-runners to reach on ground balls;
F)  Clustered his allowed hits into two innings, resulting in runs scored.

You don't have to be a stat-head to conclude that not all of these are equal, and that some of them are rather significantly different in the amount of bad luck involved.  In fact, the careful reader will have noticed the list above appears roughly in order of increasing amounts of luck, vis-a-vis the pitcher's input, determining the result of the at-bat.  I think modern-approach fans would probably put the dividing line between the "pitching" category and the "luck" category in the area of C/D.  More traditional fans might put it either before or after E.  Only Joe Morgan would put it after F.

In contrast, look at what Bard did right last night:

A)  Threw 97mph
B)  Threw a high number of strikes (65 of 96 pitches, over 70% when I think league average is 60%)
C)  Mixed in secondary pitches (change-up and slider), although I can't tell if he was able to throw his change-up for strikes)
D)  Struck out more than one per frame.
E)  Even in those resulting in hits, got to 2 strikes in most of his at-bats
F)  When he allowed balls in play, kept them on the ground (3/16 fly balls, 3/16 line drives, 9 grounders and one pop-up)

That's an awful lot of what coaches tell pitchers to do.  The rest of it nearly everyone acknowledges has a lot to do with luck and your defense.  Bard was pretty unlucky last night.  To put it in James/McCracken terminology, Bard was medium-unlucky in run support, unlucky in hits turning into runs, and perhaps-very-unlucky in balls in play turning into hits last night.
Posted by The Omnipotent Q at 12:01 PM