First Garbage Can Game of 2012

If Josh Beckett wants to get the fans' trust back, he'd better stop turning in piss-poor efforts like the one he did on Saturday in Detroit.

The Tigers hit five homers off him, two each by Prince Fielder and Miguel Cabrera. Bobby Valentine yanked him in the fifth inning with the score 7-0. 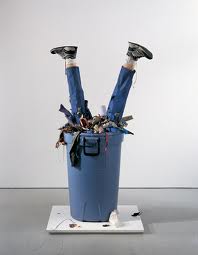 Take nothing away from the Detroit Tigers. They are a very good team that could easily end up in the World Series. However, it would have been nice had the Boston Red Sox shown up to play at least.

It was a lousy game not just by Beckett, but by just about everyone involved. Two errors by the Sox, and no runs scored. Detroit starter Doug Fister left the game early with an injury in the fourth (looked like an oblique) and was put on the DL later in the day. The Detroit bullpen gave up nothing the rest of the way, and the game brought back bad memories of last September.

Beckett simply had nothing. Even the outs were loud, and 2 or 3 fly balls ended up at the warning track.

It was the first "Garbage Can" game of 2012. (You know, the one where you do your best to "throw it into the garbage" and forget about it.)

Why do I have a terrible feeling a DL stint by Beckett may not be too far away?

10-0. I'm just glad I muted my TV and didn't listen to one word said by Buck and McCarver. (A friend on Facebook told me that they did their best to rehash last September.)

I'm so glad I pulled out my iPod and sound dock and had music on the entire game.

God bless Steve Jobs, wherever he is.
Posted by The Omnipotent Q at 8:15 PM