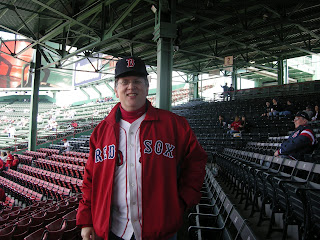 My second Opening Day at Fenway Park was a memorable one, as the Sox battered Tampa Bay 12-2. (That's Yours Truly above before the game began yesterday.) I went up to Fenway with the BLOHARDS, and it was a great trip. 100 or so us New York City-based loyalists made the trip up in two buses. We were out in Section 3 of the RF Grandstand, which many thought was one of the better seats we've ever had on Opening Day.

It was my 21st ever game at the Fens, and the 15th time they emerged victorious. Tim Wakefield and Jason Varitek both threw out first pitches, to Dwight Evans and Jim Rice.

Josh Beckett was sharp, as he allowed just the one run in the second inning. The Red Sox got the bats going in the third, scored three runs, and that was enough for Beckett.

He got a rather mixed ovation from the sellout crowd, as did Bobby Valentine as well. I'm surprised Luke Scott wasn't booed more vociferously. And BTW, that knucklehead was shooting his mouth off again yesterday.  (Screw you, Birther Boy.)

It was still close at 4-1 in the 8th when the Sox exploded for the first time this season, scoring eight runs. The first nine hitters in the inning reached base safely, and 14 men came to the plate in the inning.

Ben Zobrist hit a solo shot in the ninth off Mark Melancon to finish it at 12-2. Not a good sign when a struggling releiver comes in for some work to wrap it up and still gives up runs.

Ellsbury's injury cast a bit of a pall over the win yesterday. He was trying to break up a DP when he went into Rays shortstop Reid Brignac, and Brignac fell on top of Ellsbury and landed on his shoulder. It was an unfortunate injury. No timetable for his return yet.

It was a much needed win for the Sox. They are now 2-5, and face Tampa Bay again this afternoon, the second of a four-game series, with Clay Buchholz facing Jeremy Hellickson.
Posted by The Omnipotent Q at 11:27 AM