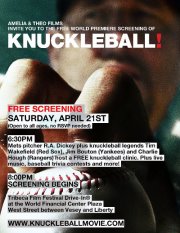 My friend Lisa Swan over at Subway Squawkers is holding a contest to win a chance to sit in the VIP section for the premiere of the film "Knuckleball" this coming Saturday at the Tribeca Film Festival in Manhattan.

I will be attendance for the film, which is a documentary centered on knuckleballers Tim Wakefield and R.A. Dickey, and it was filmed during the 2011 season. You can also get a chance to win an autographed movie poster, signed by Wake, R.A., Charlie Hough and Jim Bouton.

If you'd like to enter in Lisa's contest, go here to check out the info.

The film on Saturday will take place at the Tribeca Drive-In, which is at the World Financial Center Plaza, which is located on West Street between Liberty and Vesey Streets. The Drive-In will open at 6 PM, with pitching clinics by Wakefield, Dickey, Hough and Bouton. There will also be music and giveaways, before the film starts at 8:15 PM.

You can check out more about the Knuckleball film by going to www.knuckleballmovie.com.