Another Day, Another Blast Across Lansdowne 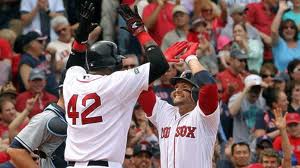 The Red Sox on Sunday were the ones who let a four run lead get away against Tampa Bay, but they made a good accounting of themselves and pulled out a 6-4 win over the Rays on Sunday.

The Sox opened the scoring on a three-run blast in the second inning by Cody Ross, a ball that went across Lansdowne Street into the parking lot. Dustin Pedroia hit one in nearly the same spot on Saturday.

They added another in the fifth on Kelly Shoppach's double, and another an inning later when the red-hot David Ortiz doubled in the go-ahead run.

Mike Aviles hit his second homer in as many days in the seventh to put it on ice.

Felix Doubront shutout Tampa Bay for the first four innings, but the Rays got him for three in the fifth, and one in the sixth, and he left with a 4-4 tie. The bullpen handled Tampa Bay the rest of the way, allowing then just four hits.

Vicente Padilla got his first win and Alfredo Aceves pitched a 1-2-3 ninth (his third straight perfect outing) for his second save.

The Sox go for the four-game sweep on Monday morning at 11 AM, as it is Patriots Day in Boston, with Daniel Bard taking on James Shields.
Posted by The Omnipotent Q at 8:28 PM