The Head Beard Is The Difference 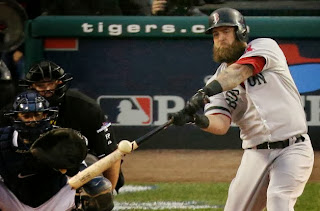 Most of the baseball world probably figured Tuesday afternoon's game would be an easy win for the Tigers, as they had an incredibly hot pitcher going against one who had struggled in his last few starts for the Red Sox.

John Lackey got the W. Justin Verlander got the L.

Lackey was sensational for 6 2/3 innings, allowing just four hits. And sure was miffed when John Farrell pulled him out in the 7th. But the pen picked it up for him, with Junichi Tazawa and Koji Uehara pitching out of a 1st and 3rd, one-out jam in the 8th. And of course, Koji pitched around a single, getting a DP and a strikeout to end an exciting 1-0 Red Sox win.

All the Sox needed was a Mike Napoli home run in the 7th. Napoli was really struggling going into the at-bat, having struck out in all six of his previous ALCS at-bats.

The Red Sox once again waited around to get their first hit, which happened on Jonny Gomes' infield grounder in the fifth. Verlander was simply dominant, and striking out six in a row at one point. But Lackey matched him, striking out 8 in his likewise dominant performance.

It was another game were the Red Sox walked along the edge, and got a win. They are incredibly hitting just .133 in this series so far, and lead it 2-1. Two more wins to get into the World Series.

I watched the game in two different bars, at Duke's with my friends from The BLOHARDS (for the first 7 innings), and then scooted down to The Mad Hatter before my Trivia Night with a few other Red Sox fan friends. The ending made my Trivia even more enjoyable last night.

Jake Peavy goes up against Doug Fister at Comerica Park in Game 4 tonight.
Posted by The Omnipotent Q at 10:27 AM