Early Runs Put The Sox On The Brink 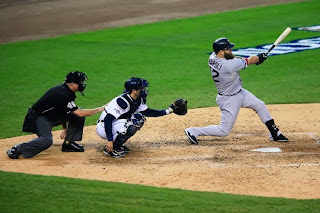 I was thinking about last night's game all yesterday afternoon that it was important that the Red Sox jump out early and get a couple of runs, and not wait until the 5th inning to get their first hit.

Good work, boys. They had hits in all of the first five innings. Including four runs.

Mike Napoli hit a 460-foot bomb to center in the second off Anibal Sanchez (I knew he wouldn't repeat his Game 1 success), and the Sox were off. They added two more in the inning, and another on a wild pitch (scored by Napoli, who had three hits, and just a triple short of the cycle) in the third, and it was 4-0. I was hoping that would be enough.

It was. Just barely.

Detroit chipped away, and it was 4-3 by the 8th. Jon Lester went 5 1/3 innings, allowed two runs. Not vintage Lester, but certainly good enough. The pen took over, and after Junichi Tazawa allowed a run in the 7th, Craig Breslow got two outs before Koji Uehara retired the last five Tigers to nail down the 4-3 win.

Uehara is simply money in the bank.

The win puts the Red Sox one win away from their 13th American League pennant. My pal Jere at A Red Sox Fan From Pinstripe Territory has some fun facts at his blog today about the ALCS. I never knew the Red Sox have never lost a Game 6 in their ALCS history (obviously since 1985, when it went to a best of seven series), and are 5-0. Also that they have never led 3-2 in their ALCS history, and have never played in a six-game ALCS (their last four ALCS appearances have gone the full seven).

Game 6 will happen Saturday, with Clay Buchholz taking on Max Scherzer. The time is till to be determined. If the NLCS is over tonight, the game will be at 8 PM, if the NLCS has a Game 7 tomorrow, the Sox and Tigers will play at 4:30 PM ET.
Posted by The Omnipotent Q at 11:33 AM