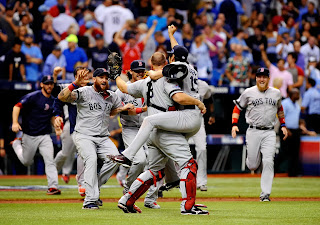 I must admit, it was a nerve-wracking Game 4 last night.

I did Trivia at The Mad Hatter while the Red Sox-Rays game was going on. By the fifth inning, it was complete and I could keep my full concentration on the game.

I thought that line drive DP that Stephen Drew hit into that ended a big threat in the second would come back to haunt the Sox. It was a marvelous play by James Loney and kept the Sox off the scoreboard.

They finally got on the board in the 7th, on a wild pitch that scored Xander Boegaerts, and the second on an infield hit by Shane Victorino that scored Jacoby Ellsbury. The third run came in on Dustin Pedroia's bases loaded sac fly in the 9th.

Jake Peavy was...Jake Peavy. 5 2.3 innings, and allowed Tampa Bay's one run. He struck out 3 and didn't walk anyone. It's a shame he didn't get the win.

But Craig Breslow did. He was the bridge to the late innings and was phenomenal, especially striking out the side, the meat of the Rays' order, in the 7th.

And Koji got the last three in order in the ninth to erase the bad memory of Monday night and put the Sox in the ALCS for the first time since 2008.

The Sox will open the ALCS at Fenway on Saturday night against the winner of the Tigers-A's Game 5 on Thursday night in Oakland.

And here's a cool tribute to the great Koji Uehara, played to the song "Sea Cruise":