It Was a Loss, No Matter How It Ended 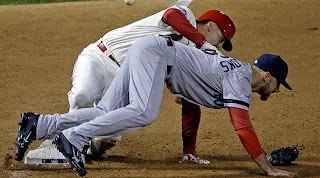 Unfortunately, it was the right call.

Game 3 of the World Series ended on an obstruction call against Will Middlebrooks and the Red Sox. A first for sure.

The Sox played fast and loose with the baseball again in Game 3 when Jarrod Saltalamacchia made an ill-advised throw to third to try to nail Allen Craig at third base after Dustin Pedroia made a fabulous play in the drawn-in infield and threw home to get Yadier Molina at the plate. Salty's throw went off Middlebrooks' glove and into foul territory in left. Craig then got up and fell over Middlebrooks, who was still on the ground.

Umpire Jim Joyce ruled obstruction, and awarded Craig home, giving the Cardinals a 5-4 win. The Sox fought back from 2-0 and 4-2 deficits, to have it get away in the ninth.

"If a fielder is about to receive a thrown ball and if the ball is in flight directly toward and near enough to the fielder so he must occupy his position to receive the ball he may be considered 'in the act of fielding a ball.' It is entirely up to the judgment of the umpire as to whether a fielder is in the act of fielding a ball. After a fielder has made an attempt to field a ball and missed, he can no longer be in the 'act of fielding' the ball. For example: an infielder dives at a ground ball and the ball passes him and he continues to lie on the ground and delays the progress of the runner, he very likely has obstructed the runner."

So be it. It is a miserable way to end a World Series game. But the bottom line is that the Red Sox never led in this game. And they continue to struggle at the plate (they didn't get their first hit until the 4th inning). The team is hitting .188 for the World Series, and ,225 for the postseason. Saltalamacchia and Stephen Drew are black holes in the Red Sox lineup. That angers me more this morning than the way last night's game ended.

And John Farrell, who I like as manager, made some really odd decisions near the end of the game. The most glaring one was letting Brandon Workman, who has never batted in his entire pro career, hit with one out in the ninth. He was no match against Trevor Rosenthal, striking out on three pitches. Farrell should have double-switched in the bottom of the eighth, taking Salty out (who made the last out in the inning) and have David Ross catch and bat ninth.

I'm betting the way last night's game ended has left a bad taste in the players' mouths, and can't wait to get out there to avenge what happened. The Sox have had some bad losses this season, and have quickly bounced back from them. Now they are down 2-1 in the World Series, and need to do just that tonight, with Clay Buchholz facing Lance Lynn. Buchholz has struggled this postseason, and the Sox bats need to back him up, as you don't know how long he's good for.

How they hit tonight will say a lot about how they put last night's loss behind them.
Posted by The Omnipotent Q at 11:11 AM