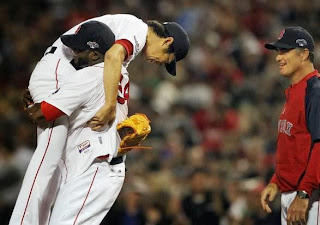 My Saturday Night softball league resumed a couple of weeks ago, and with some really good weather yesterday, I decided to play, and use the iPhone to follow Game 2 from Fenway.

I was in the Village just as the game in Boston was starting (the field is actually in the West Village), and found myself near the MLB Fan Cave, on 4th and Broadway. I got there just in time to see the Red Sox score their first two runs, including the first of David Ortiz' two bombs on the day.

Being there is such a surreal experience, as many of you know that I used to work there when it was Tower Records. I have ten million memories of that place, and have been inside the MLB Fan Cave on two occasions. I worked at Tower the night of Game 6 of the 1986 World Series. I couldn't help but flash back to that night as I watching the Red Sox on their TVs scoring runs.

Could that really have been almost 27 years ago?

Anyway, I kept my iPhone on me throughout my softball game, getting updates in-between innings. (I had a successful night, going 3-for-6 with 4 RBI in an 18-6 romp.)

John Lackey didn't have his best stuff on the night, walking 3 through 5 1/3 innings. But it was one of those games when the offense backed up the pitching, and the Red Sox never trailed after jumping out to a 2-0 lead. Jacoby Ellsbury doubled in a run, and Stephen Drew tripled in another.

Craig Breslow and Junichi Tazawa both slammed the door on Tampa Bay, getting inning-ending double plays in the 7th and 8th. And Papi put a capper on the evening with a majestic shot to right in the 8th for his second blast of the day, the first time he has ever hit two home runs in a postseason game.

Koji Uehara was...Koji Uehara, striking out the first two batters of the ninth on six pitches, then getting a grounder to first to wrap up the 7-4 win.

The Sox go for the sweep on Monday night at 6 PM at St. pete with Clay Buchholz taking the mound for the Sox against Alex Cobb. Only five teams in ALDS history have ever come back from an 0-2 deficit, and two of them are the Red Sox: in 1999 against the Indians, and in 2003 against the A's.
Posted by The Omnipotent Q at 9:58 AM