OK, It Won't Be a Sweep This Time 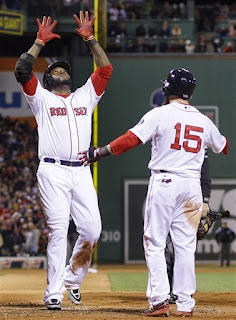 It was a tough Game 2 of the World Series for the Red Sox, as a second David Ortiz home run in the series wasn't enough, and St. Louis went on to a 4-2 win.

John Lackey was terrific, going 6 1/3 innings and allowing one run before exiting with two runners on. Craig Breslow came on and walked Daniel Descalso before getting Matt Carpenter to hit a fly ball to left. Jonny Gomes threw wide to plate and off Jarrod Saltalamacchia's glove (he should have come away from the plate to block it and concede the run), and Breslow picked it up and threw wide, and allowed another run to score. Carlos Beltran then singled in St. Louis' final run, making it 4-2.

Breslow's error will be remembered, but that wasn't the key play. It was walking Descalso, a left handed hitter. If he strikes him out, and Carpenter still flies out, the game is still 2-1 Sox. And even if Breslow makes a perfect throw to third, it wasn't clear if the runner would have been out. Granted, you don't play baseball in a vacuum, but then Beltran still singles in two runs and it would still have been a two-run Cardinals lead.

The Sox did little against the St. Louis pen, but had two on and two out in the eighth, but Mike Napoli popped up to end the threat. Michael Wacha went six strong innings, allowed just three hits, including the Ortiz blast into the Monster seats.

It ends the Red Sox World Series winning streak at nine. I had a sneaky feeling this would not be a repeat of 2004.

It's now a Best-of-Five, with Jake Peavy going against Joe Kelly as the series moves to St. Louis on Saturday. The major concern now is Clay Buchholz, who has been moved to Game 4. The Sox are obviously worried over his shoulder, and the they probably feel they can get one final start out of him for 2013. They also don't want him lined up for Game 7, as if he couldn't go if it reaches that point, they would have to start either Ryan Dempster or Felix Doubront. So going with Peavy before Buchholz makes even more sense, and gives Buchholz an extra day to rest. We'll see how it all works out.
Posted by The Omnipotent Q at 12:00 PM