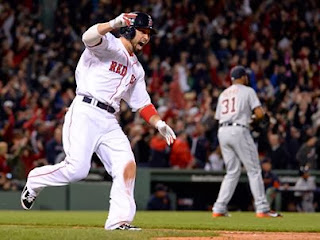 The Red Sox did it on Saturday night, winning their 13th American League championship with another tense game, winning it on Shane Victorino's grand slam in the 7th inning, 5-2.

Koji Uehara slammed the door in the ninth, and was awarded the ALCS MVP Award.

I watched most of the game on Saturday at my old haunt, the Riviera Cafe, with a packed house of delirious Red Sox fans. My buddy Chris and I enjoyed the win together. I have a million pleasant memories of the Riv from 2004, and it was a joy to be back, and see another great memory.

It was one of the most tense, roller-coaster series I have ever witnessed. It probably took about five years off my life.

But I love these boys. They drive me to drink at times, but it was worth every nerve-wracking moment.

Now on to the World Series, which will open on Wednesday night at Fenway. Bring on the Cardinals.
Posted by The Omnipotent Q at 1:51 AM