The Title Will Be Decided At Fenway 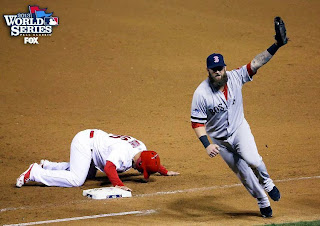 Another night, another wacky finish.

But this one benefitted the Red Sox. Pinch-runner Kolten Wong was picked off first base with two outs in the ninth inning by Koji Uehara to even the World Series at two apiece, 4-2.

Yes, it was the first time a World Series game ended with a runner picked off first base. (And it was not a "walkoff pickoff", as the home team always wins when that term "walkoff" is used. Whatever.) It also would have been nice to see the pickoff, as Fox was focusing on yet another crowd shot when Koji pulled off the pickoff.

This was another game that saw some unusual stuff happen. David Ortiz called an impromptu meeting in the corner of the dugout in the top of the sixth inning to rally the troops and say "we can hit this guy." It sure as hell worked, as Jonny Gomes blasted a three-run home run with two outs in the inning to break a 1-1 tie and put the Sox up, 4-1.

And you can thank Shane Victorino's stiff back for that, as Gomes was not in the original lineup, and went into LF when Victorino was a late scratch.

John Lackey made his first relief appearance in the 8th inning, only allowing one batter to reach, on a Xander Bogaerts error.

Clay Buchholz gutter through 4 innings, allowing just an unearned run. Felix Doubront came on and was terrific for 2 2/3 innings, allowing just a single after retiring the first 8 men he faced. John Farrell then decided for some unknown reason to bring in the struggling Craig Breslow, who allowed a single and a walk. Junichi Tazawa retired the last hitter, Matt Holliday, on a ground out, keeping the game at 4-2.

It's now a best-of-three, and the new World Series champion will decided at Fenway Park for the first time since 1975 later this week. Tonight will be a rematch of the Game 1 starters, Jon Lester vs. Adam Wainwright. And I don't even want to thank what kind os screwball finish we'll see in this one.