The Hat Trick In One Decade 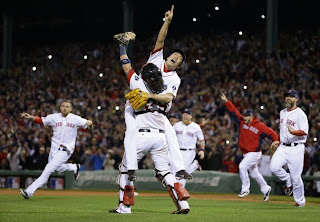 For the third time in ten years, the Boston Red Sox won the World Series, with a convincing 6-1 win at Fenway last night. It was the first championship won in Boston since 1918.

David Ortiz was the MVP (of course), and this punches his ticket to the Hall of Fame for sure.

Shane Victorino had four RBIs last night, including a bases-loaded triple in the third inning that got the Sox on their way.

Stephen Drew finally came out of his postseason funk with a fourth inning solo home run.

John Lackey was simply magnificent, going 6 2/3 innings, allowing one run, and completing his redemption tour. Love the fact he did not want to come out in the 7th when St. Louis was threatening, saying very clearly "This is my guy!" John Farrell then gave him one more hitter (who he wound up walking). Good for him.

Koji Uehara locked it all down with a typical 1-2-3 ninth inning.

Just the second team in history to go from worst to a World Series title, joining the 1991 Minnesota Twins.

For me, it was incredibly emotional afterwards at Duke's, on the East Side, where I watched it with my pals the BLOHARDS. Tears flowed afterward, then the champagne did.

From the bottom of my heart, thank you Red Sox.