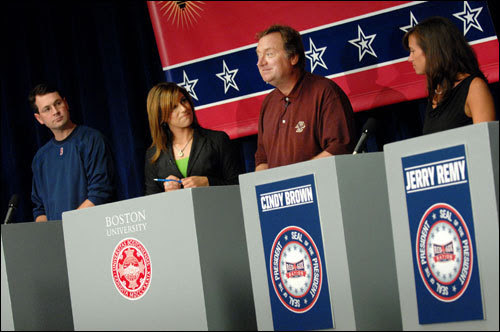 I was saddened today to hear the sudden death of Tim Russert, the NBC newsman and longtime host of the Sunday morning NBC TV staple "Meet the Press." Mr. Russert suffered a heart attack in his office in Washington D.C while he was doing a voiceover for "Meet the Press." He was 58 years old.

Mr. Russert had hosted the "Red Sox Nation Presidential Debate" earlier this year (pictured), and was a devoted sports fan, and his favorite sports team was his hometown Buffalo Bills. He had become something of a Red Sox fan, as well as the Boston College sports teams.

He also made a brief appearance in the documentary that I appeared in as well, "Blessed! Still We Believe 2." He was seen at Fenway in one of the scenes with columnist Mike Barnicle.

My sympathies to all the family and friends of Tim Russert. He was a terrific newsman, and he will be deeply missed.
Posted by The Omnipotent Q at 4:12 PM

When I got the news, it was by e-mail to my phone:

He died at the NBC Studios in Washington;

I choked back tears, hearing this;

No longer will Imus say to Bernie, "Get Russert On The Phone";

Steinbrenner issued an Official Statement in mourning. George and not "Idiot Boy", Hank;

I do remember his days with Pat Moynihan and Mario Cuomo;

Tim's missed, already and will be missed at All Star Game Time, in the All Star Celebrity Softball Games.