It's Fight Night at the Fens 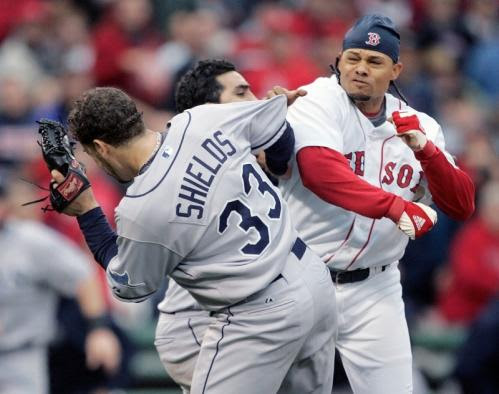 You knew this was coming.

After all the hard feelings of the previous night, you knew it was just a matter of when the Tampa Bay Rays would retaliate against Coco Crisp. Surprisingly, it was in the bottom of the second inning, when Tampa Bay pitcher James Shields hit leadoff batter Crisp on the second pitch of the at-bat, and Crisp charged the mound, and it set off a benches-clearing brawl. Coco was tackled by Dioner Navarro, the Rays catcher, and it allowed Jonny Gomes, Akinori Iwamura and Carl Crawford to punch him, in full view of the TV cameras. Coco, Shields and Gomes were all tossed from the game, and will be facing suspensions, as will Iwamura and Crawford when MLB looks at the video. (UPDATE: For those of you looking for video of all the Fenway hijinx of last night, check out my next post for the clips.)

And it wasn't the only scuffle of the evening.

This bizarre night got even stranger, as Manny Ramirez and Kevin Youkilis exchanged words in the dugout after the fourth inning, and had to be separated by their Red Sox teammates. There was some pushing and shoving, but it didn't appear that any punches were thrown. As I write this, it is still not known what set all of that off. But we should know more about that on Friday.

Manny had blasted his 13th home run of the season, and number 503 of his career, a moonshot into the parking garage across Lansdowne Street to make it 3-0. Manny also singled in two runs to make it 7-1, which was the final score, as the Red Sox swept the series.

He left the game after possibly tweaking a hamstring in the seventh. But earlier in the game, Jacoby Ellsbury made a great sliding catch in center, after replacing Crisp. He hurt his wrist and had to leave. The Red Sox announced that Ellsbury has a strained right wrist, and no break. X-rays on the wrist were negative but he is expected to be re-examined Friday.

And lost in all of this lunacy was the terrific game Jon Lester pitched, as he went 6 1/3 innings, struck out five and allowed just one run in getting the win. Chris Carter replaced Coco in the lineup and played left field, and got two hits and scored two runs in his MLB debut. It was the 13th straight win for the Red Sox at Fenway, and they increased their first-place lead over Tampa Bay to 1 1/2 games.
Posted by The Omnipotent Q at 12:17 AM

It's like someone wrote a script in an an attempt to upstage Celtics-Lakers game 1.

I was expecting to see Rod Serling.

so Q, since I have Youk on my fantasy team and you have Manny does that mean we have to threaten each other with physical violence?

I'll meet you in the dugout and we'll settle this thing like men!!

You're on-Though we should meet at Center Ice. Hockey player s re the only ones who really know how to fight.

Though I'd beat you like Hankenstein!! Ding, ding ;P